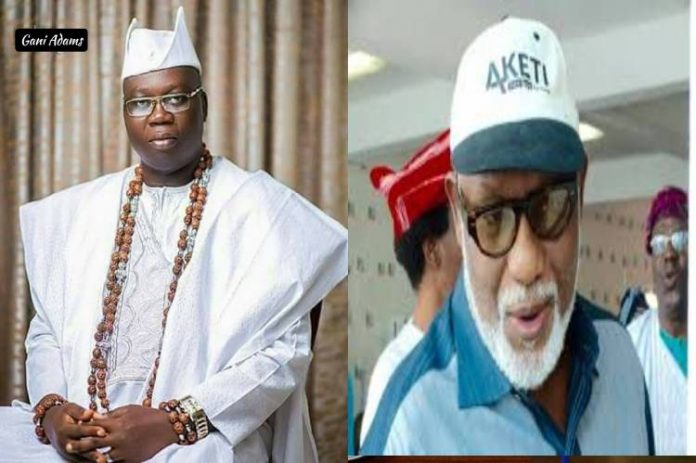 The Aare-ona-kakanfo of Yorubaland, Chief Gani Adams, has thrown his weight behind the quit notice given to illegal residents of Ondo State forest reserves by Governor Rotimi Akeredolu, Njenje Media News reports.

According to the defunct OPC leader, the Governor has the power under the constitution, to order the quit notice as the state’s chief security officer.

Njenje Media News had reported that Governor Akeredolu on Monday in a statement given a seven-day ultimatum to herders to vacate the forests following security threat by the pastoralists.

The Presidency in it’s response said that asking the herders to vacate the reserved forests could set off a chain of events which the constitution anticipated and tried to guard against.

But Gani Adams, in a statement by his media aide, Kehinde Aderemi, said the presidency failed to address the security situation across the country.

He described the statement by the President’s spokesman Garba Shehu as a threat to the sanctity of the state, and a deliberate attempt to work against the government’s interest, especially, on security.

“Garba Shehu/Presidency apparently doesn’t know the meaning of reserved forests. It’s not accessible except to authorised personnel/loggers. Apart from the place being a place for valued cash trees, it’s also meant as a haven of safety for protected animals.

“Herdsmen living in the forest are not only unauthorised, they would likely fell trees to make fire, and also kill animals for food.

“A reserved forest is not a place of residence for anyone, not even Ondo indigenes or farmers. It is most unfortunate that such a statement is coming directly from the presidency, which, according to the constitution, has the prerogative to protect the lives and property of citizens. But it is a pity the presidency now looks for ways to foil the good plans and intentions of the state to rid bad elements masquerading as herders and pastoralists.

“I am from Akoko North West in Ondo State; all our reserved forests have been taken over by these illegal residents. So the governor’s decision is in the right direction and in the state’s interest.

“I call on all Yoruba sons and daughters to support governors in the Southwest in their fight against insurgency across the region.”