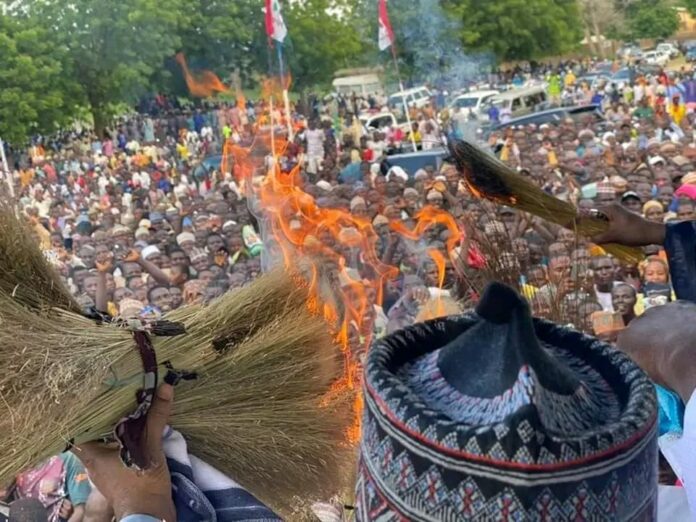 Ahead of the 2023 general elections, the Katsina State PDP chapter’s chance of reclaiming power got a boost as about 20,000 members of the ruling All Progressives Congress, APC and the New Nigeria People’s Party, NNPP dumped their parties at President Muhammadu Buhari’s Daura Senatorial zone.

The mass defection event took place at the Baure which is one of the Local Government Areas under the Katsina North Senatorial zone, popularly called Daura senatorial zone where President Muhammadu Buhari comes from.

Some defectors are from Mai’adua, Zango and Baure local government areas.

The decampees destroyed their initial party membership cards and burnt the symbol of APC which is the broom.

At the event led by the State Party chairman, Salisu Majigiri, the Governorship Candidate Senator Yakubu Lado, Senatorial candidate and serving senator from Daura zone, Ahmed Baba-Kaita, other top PDP members and candidates said, the mass defection in one local government alone from the President’s zone is telling Nigerians that it is the begining of the end for the APC.

They also attributed the mass exodus of particularly the APC members to the current state of the nation where Nigerians are feeling the severe pains of 8 years of the APC maladministration and hardship, especially the issue of insecurity.

Majigiri also hinted that, most of the decampees are supporters of Buhari’s nephew and member representing Daura/ Sandamu/Mai’adua, Fatuhu Muhammed who recently resigned his membership from the APC following his inability to secure his reelection bid.

The PDP is therefore hopeful that in the coming days, it will continue witnessing mass movements and defections of notable members from the APC and other parties which will make its chances very smooth at the 2023 general elections.