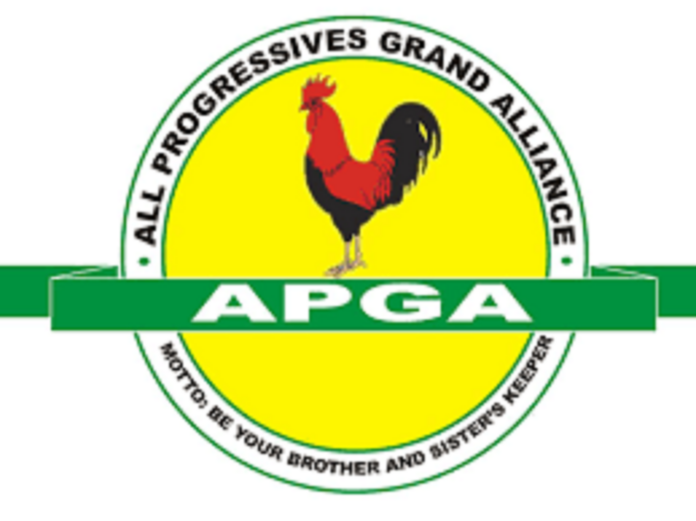 ABUJA- The All Progressive Grand Alliance, APGA may have itself to blame for its political fortunes in the 2023 general election if it fails to resolve the internal crisis now threatening its cohesion ahead of the polls, NjenjeMediaNews reports.

As a result, both men are running the affairs of the party from different secretariats, complete with two national working committees. Only recently, party chieftains including the recently decamped former Senate Minority leader, Enyinayya Abaribe, ex-Information Minister, Frank Nweke Jr among others stormed the APGA national secretariat to witness the party’s Special Presidential convention which produced a former Anambra state Chief Judge, Prof. Peter Umeadi as the flag bearer.

Two days after, Njoku-led NWC elected APGA’s founding national chairman, Chekwas Okorie as its flag bearer; a development likely to throw up litigations before and after the elections unless the party finds a way to resolve the issue.

Speaking shortly after the emergence of Umeadi, Oye took Njoku to the cleaners accusing him of plotting to distract his leadership of the party.

According to him, “APGA is the real party; our last convention was held on 31st May, 2019. Since 2019, we have not had factions in APGA. All the people parading themselves as leaders of APGA are meddlesome interlopers, they are fraudsters. After our 2019 convention, Edozien Njoku went to Owerri to elect himself chairman. This country must be a country of law and order.

“There is only one leadership in APGA. I want the Independent National Electoral Commission, INEC to be fair in their judgement. Why should a political nonentity be parading himself as a national chairman of APGA? We must deal with the people causing trouble in this country. The man called Edozie Njoku does not exist.”

However, Njoku did not take the salvo from Oye lightly as he clarified his position on the matter this way:  “As a political party, we have noticed series of attempts to confuse the salient issues relating to the recent Supreme Court judgment by some individuals in a bid to create confusion where none exist.

“Recall that ever since the nation’s apex court declared that the removal of Chief Edozie Njoku, as the national chairman of the All Progressives Grand Alliance, APGA, was illegal and non-justiciable; some misguided individuals whose stock in trade is to benefit from crisis, went to town with the narrative that the pronouncement of the Supreme Court was forged.

“We wish to state that one Jude Okeke claimed that he assumed the position of the acting chairman of the party after Chief Edozie Njoku, who emerged from the National Convention of APGA, which held in Owerri, Imo State capital on May 31, 2019, was suspended.

“On the basis of that false claim, the Jigawa State High Court sitting at Birin Kudu ruled that the Independent National Electoral Commission, INEC, should deal with the said Jude Okeke and uploaded the name of the Governorship candidate submitted by him for the November 6, 2021, Anambra State Governorship Election.

“After listening to the arguments of the counsel to the parties in the suit, the Court of Appeal set aside the ruling of the Jigawa State High Court on the basis that the court lacked territorial jurisdiction to entertain the matter, which amounted to forum shopping.

“Stunned by the Appeal Court Kano’s reversal of the Jigawa State High Court ruling that empowered him to submit name of governorship candidate to INEC, Jude Okeke went to the Supreme Court on Appeal.

“At the Supreme Court, Jude Okeke’s appeal was dismissed on the grounds that the purported removal of Victor Oye was not in order and that his decision to go to far away Jigawa state for an exercise that happened in Southeast amounts to Forum Shopping and abuse of the court process.

Speaking exclusively to Vanguard on the issue, Njoku insists that the party is one and united under his leadership, saying, “APGA does not have two Presidential candidates to my knowledge. As per the Federal High Court ruling, the executive that emerged from the convention in Owerri is the executive of APGA by law. No other executive can conduct primaries in APGA. The icing on the cake is the latest Supreme Court judgement which pronounced Chief Edozie Njoku as national chairman saying his removal is not justifiable.”

Oye on his part, told this medium that no faction exists in APGA and that Umeadi remains the party’s Presidential candidate.

It is left to be seen who INEC would accord official recognition among the two men in the months ahead.