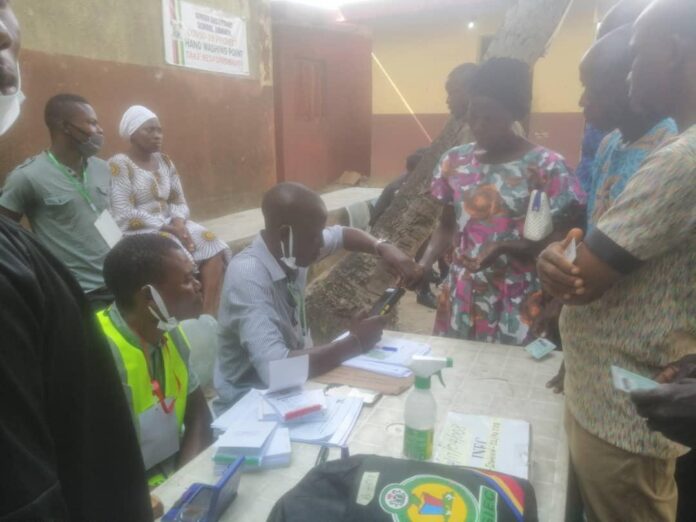 The Accord Party in Lagos satte has vowed to challenge the results of the just-concluded local government election at the tribunal, Njenje Media news reports.

The Secretary of the party, Dele Oladeji,  at a news conference on Monday, in Lagos said that the party would challenge results of local government elections on grounds of alleged manipulations and non-inclusion of party logo.

He also alleged that the security agencies and the umpire performed below expectations of the voters.

According to him, the party, just as it recovered some of its stolen mandates through court after the 2017 council poll, will also head to tribunal to recover all its stollen mandates in some wards.

“In view of our experiences in the just-concluded 2021 Local Government (LGs) and Local Council Development Areas (LCDAs) elections, and the experiences of our candidates in their various wards, we say the election fell below democratic and electoral tenets of democracy.

“There were a lot of malpractices that disenfranchised a lot of voters and denied our candidates a true contest in the exercise.

“We noticed and reported to LASIEC, without any response, that many of the electoral officers are card carrying members of the ruling All Progressives Congress (APC).

“This is an aberration of every democratic tenet and every electoral standard, and we are going to push all at the tribunal with evidence,” Oladeji said.

Oladeji said that the logo of the Accord Party was not included on the ballot paper in Apapa LG, saying such election should be declared null and void.

”Many of the alleged malpractices took place in Shomolu, Ikotun-Igando, Ikorodu North LCDA, among others,” he said.

He said that the party noticed over-voting and ballot box stuffing, which he said, was allegedly rampant in many wards where the party fielded candidates

“We have evidence of this at Somolu where ballot boxes are filled with ballot papers that were not thumb-priinted at the polling booths.

“A lot of Lagos residents were disenfranchised from casting their votes because of violent thugs, cultists and Agberos, who chased voters away from the polling booths.

“Also, there were a lot of discrepancies between the results declared at polling booths and those at the collation centres,” Oladeji said.

He said that the party also have evidence of faked Permanent Voter Cards (PVCs) used by some people to vote because electoral officers resorted to manual accreditation.

“There were instances of non use of the Smart Card Readers even though they were present at the polling units.

”Electoral officers jettison the use of the card readers for authentication and accreditation. This gave a lot of rooms to illegal voting.

“We noticed a lot of malpractices in this electoral exercise, which falls beneath the oath of office LASIEC staff and the chairman sworn to.

“In all the local government where we have been disenfranchised, marginalised or rigged out, we are going to the tribunal to win back all the stolen mandates,” he added.

He said that the State Organising Secretary of the party, Mr Emmanuel Ayodele, was allegedly arrested by security agent in Abule-Oki Collation Centre, in Iyana-Ipaja area, for standing up against rigging.

Oladeji said that the security agencies and the umpire ought to always be above board and live up to their responsibility by shunning partisanship and all allurements of politicians.