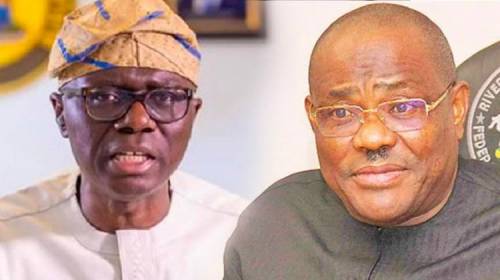 Justice Haruna Simon Tsanami, in a ruling on Friday, directed that the law passed by Rivers State House of Assembly and assented to by Governor Nyesom Ezenwo Wike must be put on hold.

The judge gave the order hours before Governor Babajide Sanwo-Olu of Lagos State signed the law on VAT.

The appellate court’s decision followed an application by the Federal Inland Revenue Service (FIRS), seeking a stay of execution of the order of a Rivers State high court in the matter.

Wike recently signed into law the bill on Value Added Tax (VAT) collection in the state.

He signed the bill which was recently passed by the state House of Assembly at the Government House, Port Harcourt.

He said the judgment of the Federal High Court sitting in Port Harcourt had sufficiently addressed the illegality perpetrated by the Federal Inland Revenue Service (FIRS).

On Thursday, Lagos State House of Assembly also passed the bill after a unanimous vote by the lawmakers.

However, the court has issued an order of perpetual injunction restraining the FIRS and the Attorney-General of the Federation, Abubakar Malami, from collecting, demanding, threatening and intimidating residents of Rivers to pay to FIRS, personnel income tax and VAT.

Both Rivers and Lagos state governments have already enacted legislations to give effect to the judgment in respect of VAT.

An earlier application by the FIRS to the high court in Rivers to stay execution of the judgment was on Monday refused by Justice Stephen Dalyop Pam on the grounds that the application would negate the principle of equity as the state legislature had already enacted law on the VAT collection.

You Are A Fulani Terrorist — Benue Governor Ortom To Bauchi...