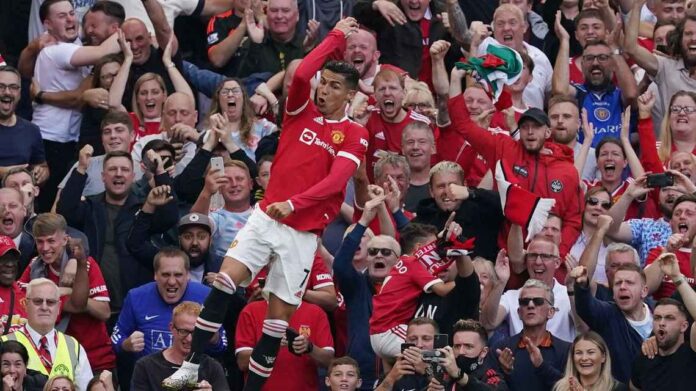 In an emphatic return to the club that premiered him to stardom, Cristiano Ronaldo scored twice as Manchester United beat Newcastle United 4-1 at Old Trafford on Saturday, Njenje Media News reports.

United took the lead in stoppage time at the end of the first-half when Mason Greenwood’s deflected shot was spilled by Newcastle goalkeeper Freddie Woodman and Ronaldo reacted quickest to score from close range.

They were pegged back on 56 minutes when Javier Manquillo equalised for the visitors on the counter-attack. Manchester United’s players were caught out of position and Manquillo scored with a fine effort across the face of goal.

But United were soon back in front, Ronaldo getting on the scoresheet for the second time in the 62nd minute. Luke Shaw powered into the Newcastle half before poking the ball through to Ronaldo, who took a touch before shooting through Woodman.

Bruno Fernandes joined his Portuguese compatriot on the scoresheet with a long-range goal with 10 minutes remaining, before substitute Jesse Lingard added a late fourth to secure all three points as United moved top of the Premier League table.

Meanwhile, Pierre-Emerick Aubameyang fired Arsenal to their first win of the season as they beat Norwich 1-0 on Saturday.

Mikel Arteta’s side lost their opening three Premier League games to Brentford, Chelsea and Manchester City and were rooted to the bottom of the table alongside Norwich before the game.

Nicolas Pepe had an opportunity to put Arsenal ahead at the end of the first half after Bukayo Saka’s shot was deflected into his path. He struck the ball well but Brandon Williams slid across to stop it entering the net.

Instead, their opening Premier League goal of the season came on 66 minutes through Aubameyang.

Pepe took two shots at goal with one being saved and the other hitting off the post and into the path of Aubameyang who hit it into the net.

Messi is the greatest footballer I have played against – Ronaldo confesses

‘Not Only Shocking But Irresponsible’ –Oshiomhole Reacts To Calls For Buhari...