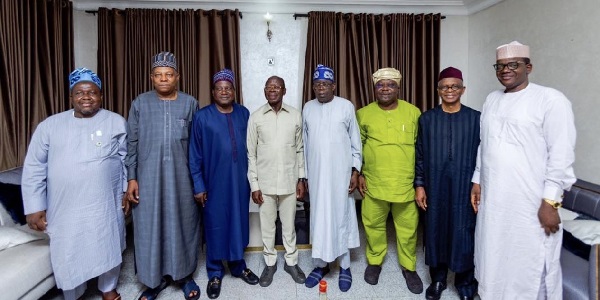 The standard bearer of the ruling All Progressives Congress (APC) Asiwaju Bola Ahmed Tinubu on Tuesday reached out to critical stakeholders of the party for the actualisation of his presidential ambition.

At the meeting in Tinubu’s Abuja residence was Kaduna Governor Malam Nasir El-Rufai, and his Zamfara counterpart, Bello Matawalle.

Also at the meeting were the APC National Secretary, Senator Iyiola Omisore and the vice-presidential candidate of the party, Kashim Shettima.

Although details of the meeting were still sketchy, there were speculations that El-Rufai may be appointed Director-General of the presidential campaign council of the APC flag bearer.

Sources close to the presidential candidate said that the meeting may not be unconnected with a reported attempt by the party’s leadership to reach out to critical stakeholders, especially from the North-West geopolitical zone.

“Given the electoral value and the huge votes from the North-West, the meeting discussed the modalities to ensure victory at the February 2023 presidential election.

“The meeting also discussed the possibilities of appointing a director-general for the campaign council from the region,” the source hinted.

Shettima, during a meeting with President Muhammadu Buhari, asked the President to thank Borno Governor, Babagana Zulum for turning down “recurring mention” of him and pressure from his colleagues to push for the vice presidential slot.