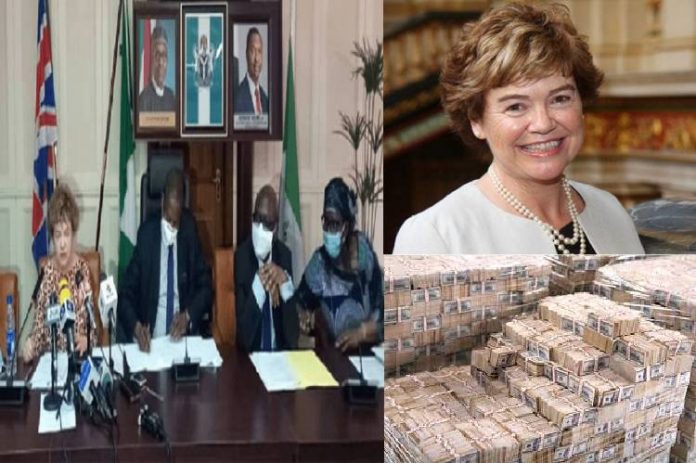 Mrs. Catriona Laing, The British High Commissioner to Nigeria, Catriona Laing, has in a terse message to Nigerian leaders stated that ill-gotten and looted funds are not welcomed in the United Kingdom, Njenje Media News reports.

She made the assertion on Tuesday, during the signing of the Memorandum of Understanding (MoU) between the united kingdom and Nigeria for the refund of former Gov. James Ibori’s confiscated assets in the UK at the Ministry of Justice.

She added that the MoU will return over £4.2million pounds recovered from the associates and families of James Ibori to the Nigerian government.

“The return of these assets to Nigeria has been subjected to a number of hard-fought legal challenges by third parties which were defeated in the UK courts. We will make sure the full weight of law agencies is meted upon those who come to hide their illegal proceed of crime in the UK”.

Njenje Media News recalls that in February 2012, former Delta State Governor, James Onanefe Ibori pleaded guilty to charges of money laundering, conspiracy to defraud, and forgery and was sentenced to 13 years in prison by a UK Court.

Commissioner Catriona Laing said that transparent asset recovery is a top priority for both UK and Nigeria governments.

“It is essential that this agreement makes strong provision for transparency, monitoring, and accountability.

”She further stated; it is an upright principle for both the United kingdom and the Nigerian government, that stolen assets should be used for projects that benefit Nigeria’s poor”,  she stated.

Abubakar Malami, SAN, the Attorney-General of the Federation and Minister of Justice, said the federal government is committed to ensuring the transparent management of all recovered assets.

“The returned assets will assist in expediting the construction of three major infrastructure projects across Nigeria.

Next IGP Appointment Won’t Be Based On Ethnicity — Presidency

Goat And Dog Elected As Mayors In The US