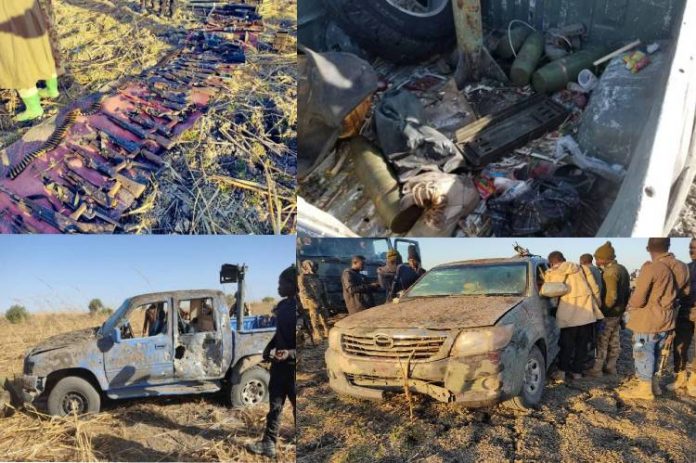 This was made known in a statement on Tuesday by The Director, Army Public Relations, Brigadier General Mohammed Yerima in a statement, Tuesday said it was part of the ongoing Phase II of operation “TURA TAKAIBANGO”.

“The clearance onslaught was based on the directives given by the Chief of Army Staff (COAS) Lieutenant General Ibrahim Attahiru when he visited the Theatre of Operation LAFIYA DOLE.

“During his operational visit to DIKWA, the COAS issued directives to troops to advance and recapture Marte and thereafter project further to clear other adjoining villages which include Chikun Gudu, Kerenoa, and environs.

“Following the directive, the gallant troops moved in, achieved the objective, and projected ahead. In the course of the clearance operation, troops encountered heavy fleets of the terrorists, engaged and ultimately obliterated them.

“In the encounter, 25 members of the terrorist group were neutralized while the following weapons were captured: 2 Browny Machine Gun, 20 AK 47 Rifles and 5 FN Rifles, 2 60mm Motor Tube and 2 General Purpose Machine Guns.

“Other weapons captured during the operation also include 3 Anti Air Craft Guns, 2 Automatic Grenade Launchers, 2 Gun trucks, and one CJTF Hilux amongst others.

“The troops not swayed by the success project further to ensure no elements of the terrorists were left within the area.

“The COAS has already commended the gallant troops and charged them to maintain the momentum in order to ensure that the area is completely cleared and dominated. He also instructed them not relent in their new offensive against terrorism and insurgency”.

Barcelona FC Of Spain Is 2021 Richest Club In The World