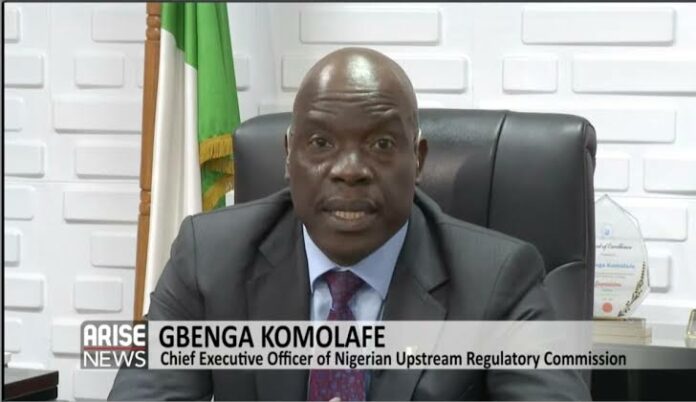 The Federal Government, through the Nigerian Upstream Petroleum Regulatory Commission (NUPRC), yesterday, said it would commence the installation of its own flow meters on oil production facilities and pipelines in the upstream sector.

The move, though radical, considering that the nation has always depended on data from oil producing firms, has been approved by President Muhammadu Buhari, and is expected to save the nation billions of dollars lost through inaccurate meters and dependence on oil companies for data.

Although claims that Nigeria does not know its daily oil production have once been discarded, the NUPRC Chief Executive Officer, Gbenga Komolafe, confirmed that the nation relies on production data from operators, rather than the regulator sourcing its own data from its own installed meters.

This confirms claims that some oil producing firms may have been shortchanging the country for many years, just as Komolafe noted that earnings lost to such activities run into billions of dollars.

By depending on operators’ data, Nigeria only does not know how much is being produced from its reserves, it has also lost billions of dollars in potential revenue from under-reported volumes.

It would be recalled that some operators are still in court over inaccuracies bordering on contradictory reported volumes from flow meters in the same export pipeline.

Besides, the regulator noted that talks are underway with operators of shut-in wells to bring back on-stream at least 800,000 barrels a day shut-in from the wells before the end of this quarter.

The NUPRC had expressed concerns about the country’s production capacity, citing cases of deliberate shut-in of oil wells and pipelines by operators, who are trying to deal with theft.

RELATED POSTS:  Profile Of Ogbuji-Opia, Why Chief Andy AZIKE Is The Best Fit For Aguata Constituency

Indeed, Komolafe had said the effect of the level of theft has resulted in the declaration of force majeure at Bonny Oil & Gas Terminal (BOGT) and shut-in of wells from fields evacuating through the Nembe Creek Trunk Line (NCTL) and the Trans Niger Pipeline (TNP), noting that similar trend has continued in 2022.

The upstream regulator in a chat with The Guardian at the ongoing GASTECH exhibition and conference in Milan, Italy, yesterday, added that the procurement process has almost been concluded as original equipment manufacturers (OEMs) have been engaged, while a forensic audit of all flow stations and production volume is underway.

At a time the country is suffering from several blows on all fronts, especially in the areas of oil theft, under-production and heavy subsidy burden, the regulator is exploring all options to generate revenue and ensure the oil sector becomes viable for investment.

“Right policy is essential in driving energy security. Putting aside national security at the moment, there is an aspect of how do we not have energy poverty and that addresses national security, and they go hand in hand.”

RELATED POSTS:  Another Police Station, High Court Burnt Down By UGM In Imo

On energy transitioning, he said: “There is need for more triangulating policies and investment as well as pragmatic approach to them. However, there would be short time pain, but if we make the right choices and investment, we can have much more diversified energy mix, which is more affordable.”

Speaking on ‘A new perspective on energy security and transition in times of profound change in global energy markets,’ India’s Minister of Petroleum and Natural Gas and Housing and Urban Affairs, Shri Hardeep Singh Puri, advocated the need for oil producing countries to leverage gas as a transitioning fuel.

“Our overall strategy is to ensure energy availability, affordability and security through biofuels mix. We need to cooperate. Green hydrogen is a key way to go. Oil producers need to find a balance for the right price.”

For CEO, MD Woodside Energy, Meg O’Neill, the Russian and Ukraine crisis has shown the relevance of fossil fuel, adding: “The world cannot exist without fossil fuel and the Russian/Ukraine war has made a revelation of that. What we should be looking at critically is the global population demand, which can impact the volatility in the sector.”