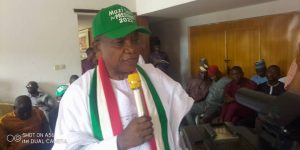 A chieftain of the Peoples Democratic Party, PDP, Dr Sam Ohuabunwa, has said that he would not be sleeping well if he were in the shoes of Atiku Abubakar, the presidential candidate of the main opposition party.

Ohuabunwa said that different meetings being held in Port Harcourt between Governor Nyesom Wike and other opposition candidates and camps would have given him some sleepless nights.

Ever since his defeat at the PDP presidential primaries by Atiku Abubakar, the Rivers State Governor has been in a romance with some candidates of different political parties.

The latest of such meetings was between the Governor and the presidential candidate of the Labour Party, Peter Obi.

And appearing on Channels Television on Tuesday night, Ohuabunwa accused the PDP leadership of taking competitors such as Peter Obi for granted, warning that such an act was dangerous.

He said that if he was on Atiku’s side, he would take all those overtures and meetings in Port Harcourt seriously, insisting that in Nigeria there’s no political meeting that is for nothing.

“And every move the competitor makes in the marketplace causes an alarm for me and I deploy forces to counter those quickly because you don’t have a second chance.

“The problem of the party may not be as bad as it is looking but the media say perception is everything and we need to pour water on this and put it off.

“Certainly, all those political meetings everybody is coming to if I’m the Chairman of the political party or the presidential candidate I don’t think I’ll sleep well or maybe because I don’t have the kind of heart or spirit that they have. I won’t sleep well.

“The next morning I’ll ensure that I fly down to Port Harcourt or wherever I need to fly and pour water on it and close this chapter so that we can move forward.

“That’s my candid advice and I’ve offered this advice through proxies to the party leadership that we need to harness our resources. This party is bleeding right now…the party has had enough time to sort out this problem.

“The problem is that this is not the only one. Just that this is the most visible one. And if we’re taking so much time to finish this, how are we going to deal with the others?… I think that the party leadership has a call, they should be humble, dynamic and strategic with the party.”