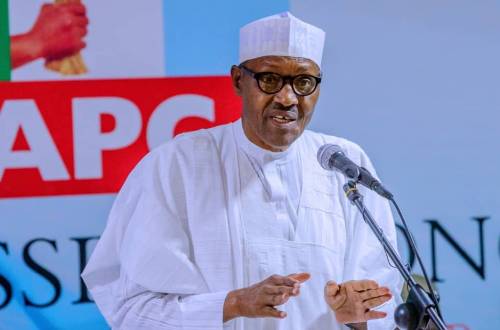 My attention has been drawn vide calls and messages from foreign colleagues, friends and well wishers to a profoundly shocking statement credited to the President of the Federal Republic of Nigeria, Major General Muhammadu Buhari, at a bilateral meeting he held with the British Prime Minister, Boris Johnson, on the sidelines of the 26th Common Wealth Heads of Government Meeting at Kigali, Rwanda.

The statement was in fact an insinuation by the President that the indefatigable leader of the Indigenous People of Biafra, Onyendu Mazi Nnamdi Kanu, jumped bail the last time he was admitted to bail in Nigeria, and pretentiously asked whether anyone knows whether he would jump bail again.

Every reasonable and fair minded person who knows the event that transpired at Afarukwu Ibeku, Umuahia, between the 10th and 14th of September, 2017, must be alarmed that the President of Nigeria can afford to make this type of statement. With profound respect, the statement is careless, mischievous, utterly false in character and in content, pedestrian, and confirms once again, the entrenched hatred, odium, and contempt this infinitely divisive and partisan President has for people of the Igbo race.

For the President to make this kind of false and prejudicial statement about a week to the delivery of a reserved Ruling on a critical application to set aside the Order revoking the bail of ONYENDU Mazi Nnamdi KANU, brought on his behalf and pending at the Federal High Court, Abuja, speaks volume.

What really was the raison d’ etre for the statement? Is it a veiled warning to the court? Does it preempt an already settled position? Will the outcome of this crucial application be merely a fait accompli? Is the statement a prognosis of what would transpire in court on the 28th of June, 2022? Is there a nexus between this statement and the ultimate decision that would eventuate on the application?

The Ruling of the 28th of June, 2022, will confirm whether or not these musings are justified.

May I now take the liberty of putting events in their right perspective.

On the 26th of April, 2017, Mazi Nnamdi Kanu was admitted to bail by the Federal High Court and during the pendency of this charge, and while preparation was ongoing for Onyendu Mazi Nnamdi Kanu’s appearance in Court on 17th October 2017, for the commencement of full trial in his case, the Nigerian Security Agents led by the Nigerian Military, brutally invaded Mazi Nnamdi Kanu’s home between 10th to 14th September, 2017, in a desperate attempt to assasinate him, and in the process over 28 innocent and unarmed civilians were gruesomely murdered by the invading troops. Mazi Nnamdi Kanu narrowly escaped death during that period by mere act of providence.

Thankfully, the judgement of the Umuahia High Court found the Federal Government of Nigeria guilty of grave violation of Mazi Nnamdi Kanu’s fundamental rights following the bloody invasion of his home at Afaraukwu, Ibeku in Umuahia, Abia state, as well as the genocidal massacre of innocent and unarmed civilians therein. The judgement still subsists till date and has never been set aside. Sadly, the Federal Government ably led by President Buhari is yet to comply with the Orders issued by the Learned Trial Court in the judgement under reference.

The discerning minds closely monitoring the ongoing persecution of Onyendu Mazi Nnamdi Kanu in a Nigerian Court, may have on several occasions, listened to the President consistently maintaining a neutral stand, and that he would allow the judicial process and law run its course.

The pronouncements of the President of the FRN, recorded in his various public outings, prominent among them was his recent statement during the Presidential state visit to Ebonyi state, where he reaffirmed his stand that the Federal Government of Nigeria (FGN) ably led by himself, will not interfere in the judicial proceedings in Onyendu Mazi Nnamdi Kanu’s case.

Ostensibly, the aforesaid declaration automatically put to a halt, the efforts of the Igbo Elders and Elites, who were hitherto, gunning for a political solution.

The world will recall that on the 18th December 2015, during President Buhari’s maiden media address, he boldly boasted to the world that Mazi Nnamdi Kanu being a British citizen, and consequently holding dual citizenship, should not be granted bail by the Nigeria Court.

Unfortunately, this pronouncement negatively impacted the direction of the case then. However, His Lordship, Honourable Justice Binta Nyako, after careful review of the facts placed before the court, and consequently considering the Application presented for the bail of Onyendu Mazi Nnamdi Kanu on its merit, proceeded to grant him bail.

While we are now preparing for another Court outing on the 28th day of June, 2022, where a crucial Ruling, which will hugely impact on the freedom of Onyendu Mazi Nnamdi Kanu will be delivered, President Buhari has made another contemptuous statement, apprarently usurping the judicial powers of the Federal High Court by making extrajudical pronouncement capable of preempting the Ruling of the Court, come 28th June, 2022, and consequently, prejudicing the entire proceedings.

It is our apt observation that President Buhari, with greatest respect to his office, stands in grave contempt of the Court Proceedings by this singular declaration, and should be made to appear in Court to answer to this contemptuous statement.

We wish to use this medium to urge the Foreign Governments and International Communities to pay more attention to the antics of the Buhari led FGN, who have sworn to violate the principles of separation of powers by intimidating the Judge seized of this case into doing their biddings.

Nevertheless, we wish to urge His Lordship, Honourable Justice Nyako, to remain firm in the discharge of his judicial functions/oaths, and uphold justice in this case without bowing to pressure.