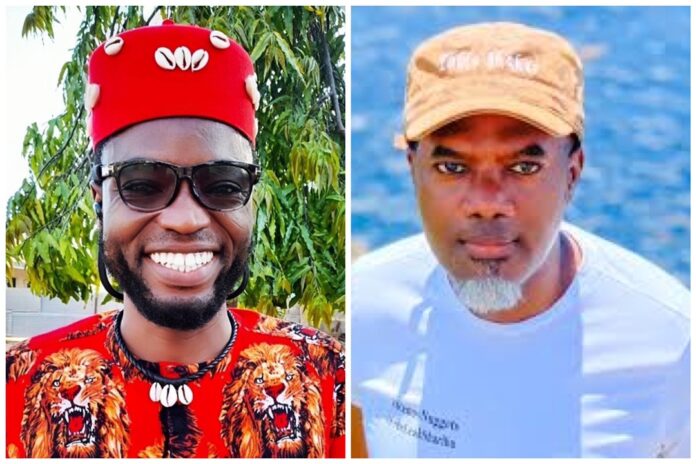 I have always maintained that apart from conspiracy from both local and foreign scene against president Goodluck Jonathan, another major reason the Otueke-born Zoologist lost his 2015 presidential re-election bid was not unconnected with the fact that he had one of the most criminally inept and fantastically clueless media aides who were more endowed in tongue than they were in that area meant to house the grey matter known as the brain.

An Igbo man and the leader of the Indigenous People Of Biafra (IPOB) Nnamdi Kanu, reportedly granted an interview in 2014 where he said that Jonathan was weak and incompetent as president and the best way Reno Omokri who was GEJ’s social media advisor could think to couter the assertion in 2017 was to start hauling invectives at the entire Igbos and listing individual appointments Jonathan gave to them.

In 21st century 2017, a supposed intellectual is listing individual appointments as achievements and even trying to use same to counter the argument that his ex boss was incompetent while in office.

This is a walking shame!

Quite frankly, I should simply pause here and die laughing…. Laughing at a mentally truncated media aide who doesn’t know that the best way to counter allegation of incompetence against his boss is by listing infrastructural facilities and other solid achievements built by this boss of his, not by naming individuals who were appointed into govt positions by him.

With this kind of mental miscarriage from Reno Omokri, do we still wonder why the APC propaganda machinery effortlessly swallowed Jonathan’s media team and successfully painted him as a president who did nothing all through the 5 years he was in office?

If Mr Omokri cannot marshall out facts and figures to counter a mere allegation of weakness and incompetence levelled against his boss by an individual, how could anyone expect him to have any reasonable response to the web of earthquakic lies and brain-resetting propaganda mounted against Jonathan by the very powerful APC lying machine??

Poor Jonathan! He thought he had a media aide in Reno. How wrong he was!

The tragedy of Reno’s situation is that he does not even realise that his failure to list Jonathan’s achievements leaves observers with the conclusion that indeed, Jonathan did nothing for Ndigbo.

In this case, who really insulted Jonathan? Is it a private citizen who said his ex president was weak and incompetent, the same thing that has been said by Asari Dokubo, Edwin Clark etc or a former media aide to this president who resorted to hauling invectives at everyone rather than listing the achievements of this president to counter this assertion???

In an article titled, “THE LESSON NDIGBO TAUGHT JONATHAN AND FUTURE LEADERS”, Omokri stated that Igbos lost the 1967-70 Biafra because they knew nothing about diplomacy which left them without much friends to help them during those trying time. According to him, the fact that no Igbo leader has come out to attack Kanu over the said interview suggests that Kanu’s position represents the views of the entire Ndigbo about Jonathan. This, he says, means that the Igbos are ungrateful bunch. In that same article, Mr Omokri categorically stated that Jonathan was the first president to give Igbos the position of Chief of army staff and Secretary to the govt of the federation and as such, Ndigbo should be eternally grateful to him.

As a full blooded Igbo man, I find this criminally offensive. This is a double barreled insult to Ndigbo because 1, what was said is a grave misrepresentation of fact. And 2, because Mr Omokri is the least qualified person to say those things, having himself been implicated in a case of identity theft in Feb. 2014 when he allegedly stole the identity of the son to the wife of his brother-in-law, one U.S based Wendell Simlin, to write an article linking the spike in boko haram bombing to the suspension of the then CBN governor, Sanusi Lamido Sanusi. (A quick Google search will give you the detail)

What moral right does a spineless faceless suspected identity thief have to talk to Ndigbo? If he was man enough, why did he resort to hiding behind a fake identity just to make a mere accusation?

Let’s treat the no1:

Igbos owe Jonathan nothing! Absolutely nothing. It is Jonathan who owe Ndigbo everything. We made him!

When the bunch of political terrorists known as the Cabal, prevented the gentleman Jonathan from taking over from the good man, Yar’Adua of the blessed memory, it was an Igbo woman, the late Dora Akunyili, who publicly confronted the Cabal and told all Nigerians that Yar’Adua was incapacitated. Her revelation gave birth to the doctrine of necessity which brought Jonathan to power. Without Akunyili, Yaradua would probably still be running the country by now even from the grave while Jonathan would be sitting quietly the exact way Mr Buhari is currently running Nigeria from the land of the WhiteWalkers with Osinbajo sitting quietly like an Arsenal fan when his club is facing a 5-0 defeat in the hands of ManU.

We gave Jonathan everything we had in 2011. We even died for him in the North in large numbers. Our support for him was 100%. Even when Jonathan bashing became the order of the day sometime last year, Ndigbo rose to the occasion and defended him even against some of his own people.

When I was doing this verbal gymnastics with the highest office in the land over a Jonathan whom I have never met, where was Reno Omokri then? He was hiding somewhere in the U.S, too afraid to write anything in Jonathan’s defence. Now that the monumental disaster, Buhari, has been declared incapacitated, Reno is running his mouth. How convenient!

Our support for Jonathan was driven by a sense of justice, fairness and equity coupled with the fact that his opponent has always been a hopeless murderous ethnic jingoist with generational hatred for Ndigbo.

Why should we now sit back and allow an integrity-challenged Reno Omokri a.k.a Wendell Simlin disparage us for no just cause??

Why did Omokri not denigrate the entire Fulanis when El-rufai and numberless Fulanis made sport of demonizing Jonathan at every turn?

Asari Dokubo, Edwin Clark, Seriake Dickson have all described Jonathan as weak, yet, Omokri neither attacked those people nor their ethnic groups. Why?

Why does he now think he can attack the whole Igbo race simply because one Igbo man purpotedly chose to criticise his ex president?

Saying that a former president was weak and incompetent, is that an insult????

Frankly, I don’t get this! Is Reno such a bad user of the Queen’s language that he no longer understand that “weak” and “incompetence” are but mere adjectives naming an attribute of a noun?

So far, Goodluck Jonathan remains the best president Nigeria ever had. His worst remains better than the best of Buhari. Is this even debatable? He was and still is, a perfect gentleman. Matter of fact, I belong to the school of thought which believes that Nigeria was and still is, too primitive for people like Jonathan to preside over.

But was he weak as president??

Keep sentiment at home let’s find out the answer.

Several months before 2015 election, Jonathan was presented with credible evidence of the treacherous ways of Attahiru Jega, the man he appointed INEC boss but he did nothing! He chose to allow JEGA continue as INEC boss because he felt he (GEJ) couldn’t withstand the pressure JEGA’s sack would bring him.

That was weakness! Jonathan’s failure to sack Jega was the height of weakness on his part.

ChibokGirlsSaga remains unresolved till today mainly because Jonathan bowed to foreign pressure and admitted it happened even after his govt had earlier dismissed it as a scam. If GEJ hadn’t bowed to pressure, he would have simply arrested that woman Principal of

Chibok school and within hours of questioning, she would have spilled the beans.

GEJ showed weakness by allowing many people including Buhari to undermine his govt.

Are we really gonna waste our time arguing this obvious fact?

The term “Weak” is an adjective and it means “liable to break or yield under pressure” among other meanings.

So I ask again, was Jonathan weak as president? In the Nigerian context, the answer is YES! Refer to the above instances I just listed out.

What then is the problem here?

Even if we lie to ourselves, how can we descend to the level of believing our own lies as the gospel truth?

My father, the late Emmanuel Nwodo Ogbu Nwachima, once allowed my uncle to take possession of our piece of land on the ground that he didn’t want to make trouble with his brother. To me, that was him being a peaceful man but it also portrayed him as weak.

I remember my father as a good man but each time I see my uncle’s children on that land, I think my dad weak. Context is of utmost importance here.

May I remind Reno Omokri that before Jonathan, two Igbo sons, Alex Ekwueme and Ebitu Ukiwe have held the position of both civilian and military vice presidents respectively. Allison Madueke has equally held a very high position in the military. So why should we be grateful for getting individual appointments of army chief and SGF even after paying with our blood in the North and are still being victimized by the present govt over our support for Jonathan?

Reno Omokri and co need to realise that those who live in glass houses should be wise enough not to start throwing stones around.

As far as Jonathan is concerned, what Ndigbo deserve from Reno and Co is gratitude, not attitude.