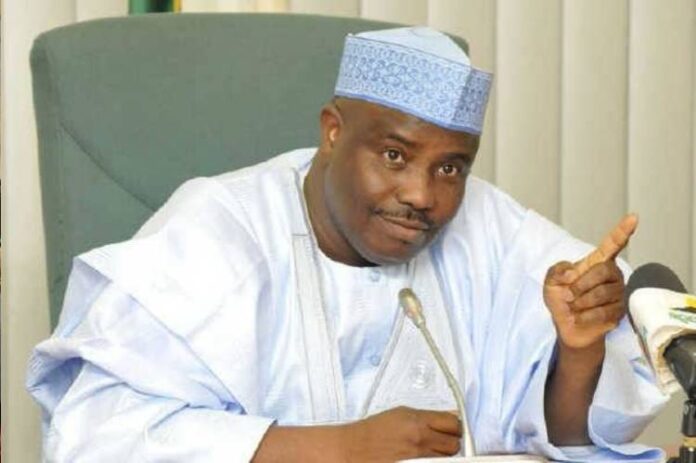 As the 2023 general election draws nearer, the Chairman of Peoples Democratic Party, PDP, Governors Forum, (PDP-GF) and Governor of Sokoto State, Hon Aminu Waziri Tambuwal has declared that Nigeria needs a leader with a broad world view and not a parochial and provincial politician.

Tambuwal equally said that the nation needs an incorruptible leader who understands that the best way to fight corruption is by personal examples and also by the building of strong institutions that can withstand shocks and manipulations.
The Governor said these yesterday at the Richard Akinnola’s birthday lecture in Lagos.
Speaking on the topic, “Security Challenges in Nigeria and Its Implication for Sustainable Development”, Tambuwal maintained that Nigeria needs a leader in tune with modern technology, not a parochial and provincial politician.
The Sokoto State Governor maintained that to overcome insecurity, there is the need for intelligence gathering and surveillance so that law enforcement agents could be proactive and reasonably predict potential crime with near perfect accuracy rather than being reactive.
The menace of insecurity, he stated, no doubt, calls for a new approach that will be founded on credible intelligence gathering.
At the well attended ceremony, Tambuwal, who is a lawyer by profession and former Speaker of the House of Representatives, said, “Nigeria needs a leader that is versatile. One that has friends and associates across the length and breadth of this country.
A leader with a broad world view and not a parochial and provincial politician.
“We need an incorruptible leader who understands that the best way to fight corruption is by personal examples and also by the building of strong institutions that can withstand shocks and manipulations.
“Nigeria needs a leader in tune with the times. Who is reasonably aware of the modern demands of technology in solving societal problems.
“Yes, Nigeria needs a bridge builder. A compassionate leader, sensitive to the needs and aspirations of the poor and needy. A leader whose words count and can be counted on. Indeed, a leader with courage”, he said
Continuing, the Chairman of PDP Governors’ Forum added that the country needs, “An accountable leader who can be trusted to face the challenges of nationhood squarely without sentiments or pandering to interests that are inconsistent with national goals.
Speaking further, Tambuwal maintained that Nigeria needs a visionary leadership imbued with a sense of patriotism, which will go a long way in changing the narrative of insecurity in Nigeria.
The nation, he stressed further, requires a leadership that is nationalistic and not tribalistic, a leadership that promotes national unity not disunity.
His words, “A leader required by Nigeria is one that will regard Nigeria as his constituency, not his state, tribe, religion or region. A leadership that inspires the nation to achieve greatness.
“A leadership that galvanizes, mobilises and directs Nigerians on the path to sustainable peace, progress and development”, he said.
Such a leader, Tambuwal reasoned, will not regard any part of the country as conquered people.
According to him, “A leader with these qualities will reach out to all and sundry and ensure that insecurity ravaging the country is put to flight.
“There is no short cut or magic wand to curtail insecurity other than the deployment of relevant tools of good governance, proper technology, necessary military and police equipment, a well trained and properly remunerated manpower, and lowering of tensions in the country through enthronement of a government that serves all and not a section and group.
“A leader smart enough to realise the imperatives of restructuring our security and governance structure.
“Finding such a leader is a task for all and I challenge you all today to find and support such a leader in 2023 so that Nigeria can begin the long walk back to peace, security and prosperity for all her citizens”, he said.
The Sokoto State Governor added that good governance is yet another major panacea for curbing insecurity in Nigeria.
“This requires that government at all levels must take deliberate steps to ensure good and accountable governance that focuses on the needs of the people”, he said.
Stating that socio-economic development factor is also key to peace and security, Tambuwal said, “examples and researches have shown that with good governance and strong institutions, most people are less likely to become enemies of the state, or embrace, crime when they can see development and opportunities”
Elimination of corruption and entrenchment of social and economic justice, he contended, is also key, adding, “Corruption gives rise to both social and economic problems. It is one of the major causes of inequality and inequitable distribution of wealth among the people.
“This leads to dissatisfaction, frustration and consequently agitations that lead to insecurity. The war against corruption must be fought with various tools”.
The Governor recalled that when the PDP Government created the EFCC and ICPC from the Nigeria Police Force, it was envisaged to be an answer to the menace of corruption since the agencies were expected to concentrate their activities solely on fighting corruption and especially economic crimes.