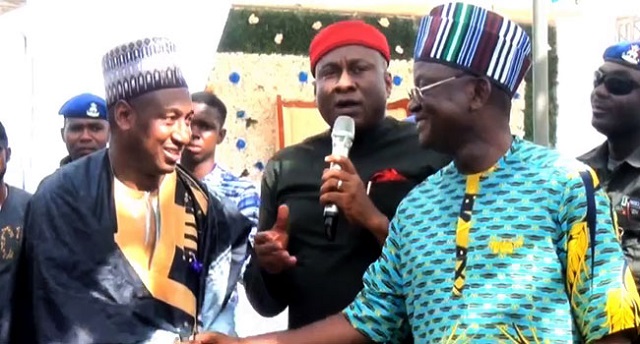 Pastoral group, Miyetti Allah has dismissed the allegation that it was behind the assassination attempt on the Benue State governor, Samuel Ortom, Njenje Media News reports.

The National Secretary of Miyetti Allah Kautal Hore, Alhassan Saleh in a statement, said the killers are within the Governor’s party and advised Nigerians not to take the governor’s allegations seriously.

Governor Ortom had alleged that he escaped an assassination attempt on Saturday along Makurdi-Gboko road.

Ortom had claimed assailants he suspected to be Fulani herdsmen opened fire on his convoy when he was returning from his farm and accused the Miyetti Allah leadership of planning to kill him.

Saleh in a statement issued on Sunday, queried the merits in the Governor’s allegation saying no herdsman lives in Benue.

“Herdsmen cannot attack him. There are even no herdsmen in Benue State because he has driven them away. He’s just behaving like a tout and it’s unfortunate that such a person could become a governor. He trivializes everything. The attack is political; they are killing themselves there. There are killers around him; everybody knows.

“We don’t take him seriously again. Where are the herdsmen in Benue State? Herdsmen have no hands in whatever killings are happening in Benue State. He has been arresting herders at the Taraba-Benue border communities with his militiamen. They would arrest herders and cattle and impose taxes on them.”

Saleh alleged that the governor was the one breeding killers in the state.

“If nemesis would catch up with him for his atrocities against herders, it’s the killers that he is breeding, not herders, that will finish him. We don’t have any hands in his matter,” he said

Why We Want To Retrench Some Workers — El-Rufai