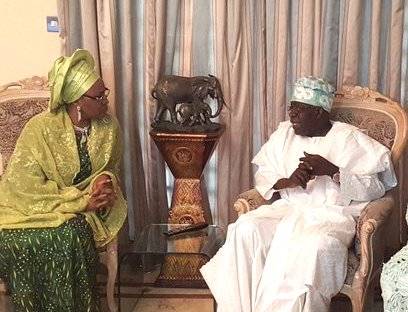 The book titled “Aisha Buhari Being Different” and written by Dr Hajo Sani, Senior Special Assistant to the President on Women Affairs and Administration (Office of the First Lady), is billed to be launched on April 8, at the Conference Centre, State House, Abuja.

Details from the invitation letters sighted by SaharaReporters indicated that Alhaji Aliko Dangote, Tony Elumelu, Abdusamad Rabiu, Prince Authur Eze, Hajiya Bola Shagaya and Femi Otedola are among the dignitaries expected to grace the ceremony where Aisha will formally unveil the book.

While Tinubu will chair the event, Folorunsho Alakija is expected to be the special guest of honour.

The book is expected to be reviewed by Professor Fatai Aremu.

Other dignitaries invited to participate in the official presentation are Mohammadu Indimi, Jim Ovia, Kensington Adebutu, Daisy Danjuma, and Idahosa Wells Okunbo, while the Minister of Federal Capital Territory, Mohammad Bello and his counterpart in Women Affairs, Pauline Tallen, will both serve as chief hosts.

Some royal fathers such as the Ooni of Ife, Adeyẹ́yẹ̀ Ẹnitan Bàbátunde Ògúnwusi; Sultan of Sokoto, Muhammadu Sa’adu Abubakar III and the King of Nchia Eleme Kingdom, Ambassador Appolus Chu are expected to grace the occasion.

Aisha had few weeks after the 2015 presidential election revealed that it was Tinubu who convinced her to join the campaign train of President Muhammadu Buhari.

The First Lady was absent at Buhari’s campaign rallies until January 13, 2015, when she was unveiled at an APC rally at the M.K.O. Abiola Stadium in Abeokuta, capital of Ogun state.

“It was my personal decision not to come out for the campaign because I needed to take care of the home front while my husband was in the field campaigning,” she said.

“It was Asiwaju Bola Tinubu who talked me into it before I decided to join the train.”

Meanwhile, the relationship between Buhari and Tinubu has been a subject of public discourse of late, especially as the 2023 presidential election gets closer.

Political analysts have rumoured the presidential ambition of the former governor of Lagos State but some chieftains in the South-West tenaciously believe that Buhari will not hand over power to him.

Nigeria’s Security Not For The Ruling Party Alone — Bukola Saraki