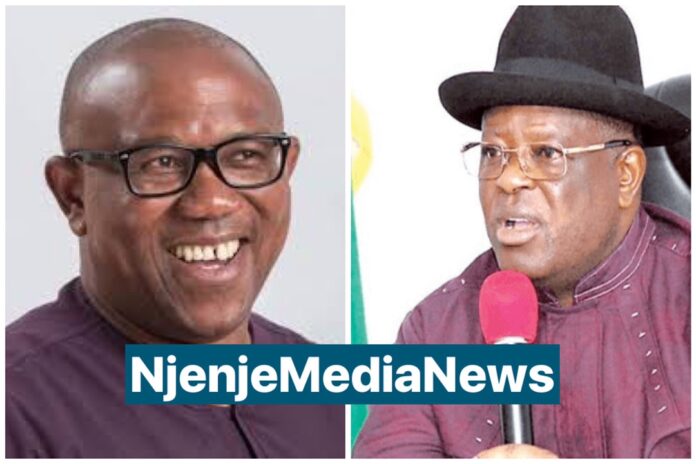 Serious consultations have commenced within the ranks and leadership of the All Progressives Party,(APC) and the Peoples Democratic Party (PDP) in the South East over the choice of Ebonyi State Governor, Engr Dave Umahi and former Governor of Anambra State, Peter Obi as presidential candidates of both parties.

In another development, supporters of former Vice President Atiku Abubakar and Governor Aminu Tambawal in the South East, have concluded arrangements to switch their support to Mr Peter Obi, less than 48 hours after the former presidential running mate of the PDP made his official declaration in Awka.

At a meeting in Awka, Anambra State convened by a former National Assembly member, which had in attendance top chieftains of both parties, there was a temporary resolution to adopt Obi in the PDP and Umahi in the APC as the choice of the zone in the coming primary elections.

Midway into the meeting, some supporters of Atiku and Tambawal joined the meeting, insisting that the declaration of Obi has made it instructive that they have no reason to support the duo, since the zone has a far better candidate for the party’s ticket.

According to Dr Elvis Chukwuka, who chaired the meeting, the essence of the “meeting was to harmonize our zone and prone down the number of aspirants from the South East across the two major political parties.

“The common practice of having too many aspirants from the zone has been the bane of actualizing our ambition of producing the President of Nigeria and we have commenced meetings in the zone and this one in Awka is the third meeting.

“So far, we are looking at Engr Dave Umahi of the APC and Peter Obi out the three contesting in PDP and this meeting is irrespective of any party that you belong.

“At this meeting, a delegation of the supporters of Atiku and Tambawal joined us protesting the statement made by Tambawal against the choice of his party’s candidate from the South East and in their resolution, they have decided to endorse Mr Peter Obi, who recently joined the race and we have accepted their position.

“The meeting also resolved to discuss with the Ohanaeze and the Ijaw Peoples Congress to support our zone for the 2023 general election and also to speak with top chieftains of the two parties in the zone.

Reacting to this development, the National Vice President of Ohanaeze, Chief Damian Okeke, told Sunday Telegraph that the position of the stakeholders is welcomed “I want to salute the organizers of this meeting and wish them well and this is exactly what we want in Igboland and we shall assist them in no small measure to achieve this.
“We urge the leaders of these parties to see reason in collapsing their structures to ensure that the next year’s general election do not elude the South East”, he said