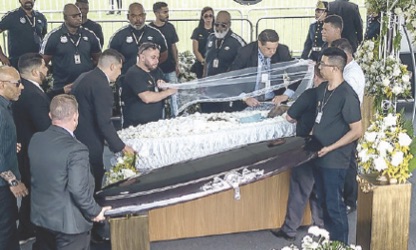 Edson Arantes do Nascimento better known to the sporting world as Pele has been buried on Tuesday in Santos, Brazil.

Pelé had chosen to be buried in the Ecumenical Necropolis Memorial, a choice he made 20 years ago, back in 2003.

He was laid to rest on the ninth floor of the vertical cemetery, chosen in honour of his father, who wore that number during his years as a professional footballer.

The Ecumenical Necropolis Memorial is located just 850 meters from the Santos football stadium, where Pelé established himself as one of the best soccer players in history.

The three-time world champion was escorted by a public procession where tens of thousands of people congregated to pay their last respect.