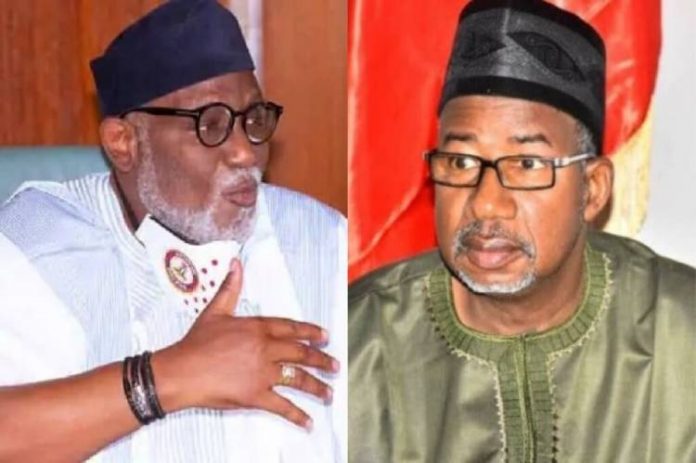 Recall that governor Akeredolu had in January ordered unregistered herdsmen to vacate the state’s forest reserves following the rising insecurity Ondo, saying “bad elements” had turned the forest reserves into hideouts for keeping victims of kidnapping, negotiating for ransom and carrying out other criminal activities.

Expectedly, the quit order had generated different reactions with Governor Mohammed saying Akeredolu lacked the right to issue a quit notice to the herders in the state.

But reacting in a statement by Olabode Olatunde, his special assistant on new media, Mr Akeredolu advised Mr Mohammed not to set the country on fire with his “highly destructive” thoughts.

He also urged Nigerians to ignore Mohammed’s comments and focus on how to unify the country.

“The position of Governor Oluwarotimi Akeredolu, SAN, is not to engage or confront anyone who has the mindset of a crisis entrepreneur or war monger,” the statement read in part.

“Very provoking and insensitive as the statement appears, we can only err on the side of caution by advising Governor Bala Mohammed not set Nigeria on fire by his thoughts that are highly destructive and undermining national cohesion.

“Nigerians should ignore him and rather focus on those issues that can bring about peace and engender unity,” the statement read.