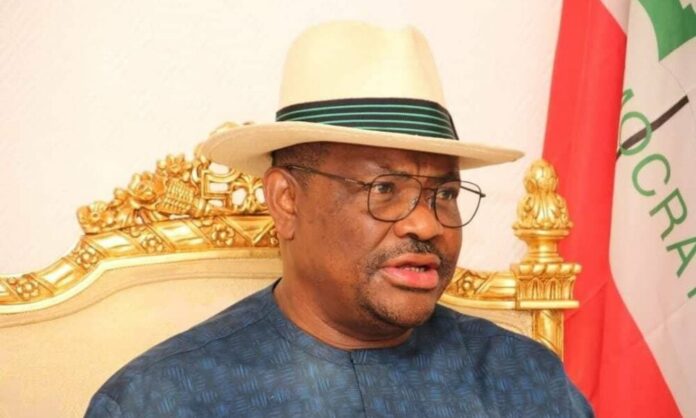 The youth wing of apex Igbo socio-cultural organisation, Ohanaeze Ndigbo Youth Council Worldwide has again come hard on Governor Nyewom Wike of Rivers State over the political intrigues playing out in the Peoples Democratic Party, PDP, ahead of the 2023 presidential election.

Our sources report that Wike and his aggrieved G-5 governors are currently out of the country where they are expected to take a final stand on the candidate to support for the country’s top political position.

They are likely to choose between Mr. Peter Obi of the Labour Party and Bola Ahmed Tinubu of the All Progressives Congress, APC, having fallen out of favour with their party’s candidate, Alhaji Atiku Abubakar.

In a statement made available to the media on Wednesday, the National President of Ohanaeze Ndigbo Youth Council Worldwide, Mazi Okwu Nnabuike described Wike’s movement as one driven by selfish interest.

Okwu, who berated the Rivers Governor for working against a Nigerian president of Igbo extraction, said Wike was now playing the ostrich.

“We want to tell Nigerians not to be deceived by the likes of Governor Nyesom Wike of Rivers State, who claims to be fighting against injustice in the PDP whereas he is merely pursuing selfish interests.

“It is on record that Governor Wike scuttled the micro-zoning of the PDP presidential ticket to the South-East because he felt he would bamboozle his way and get the ticket. But having failed to realise that selfish ambition, he turned to be shouting for justice and equity.

“Where was the equity when he chased Mr. Peter Obi of the Labour Party out of PDP? Where was equity when he refused all entreaties to back someone from the South-East for the PDP ticket? Now that he failed to clinch to the ticket, he now realises there is equity.

“Nigerians should not be deceived by Wike’s gimmicks. I also urged the governors moving with him to realise that he is pursuing a personal agenda. There is nothing like integrity in what he is doing, so his claim of leading ‘an integrity group’ should be discarded,” the Igbo youth President declared.

He added that as Nigerians await an announcement from the G-5 governors, “the citizens should not expect anything different but one that will be laced with personal desires and gains.”