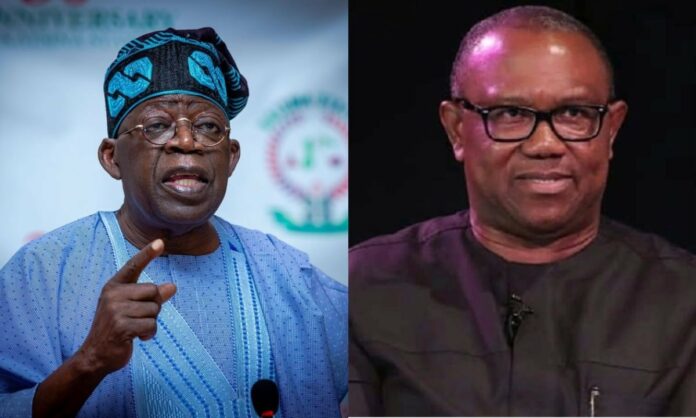 With less than two months to the 2023 presidential election, Nigerians anxiously await the next move of the aggrieved governors under the platform of the Peoples Democratic Party, PDP.

There were emerging speculations that the governors, led by Governor of Rivers State, Nyesom Wike, may end up throwing their weight behind Peter Obi, the presidential candidate of Labour Party.

However, feelers emerged again Wednesday that the presidential candidate of the All Progressives Congress, APC, Asiwaju Bola Tinubu had met for the second time with the governors.

The meeting, held in the United Kingdom, is a further push by Tinubu to secure the endorsement of the governors.

Governor Wike and Atiku Abubakar, the presidential candidate of his political party, PDP, have been at loggerheads after the opposition party’s primary election.

Atiku has also been accused of arrogance by Wike’s supporters who feel that the former Vice President should deploy all the resources within his reach to bring everyone that matters in the party together to be rest assured of his victory in 2023.

At this stage, the party hierarchy and its different reconciliation and peace committees seem to be running out of time with less than two months until the presidential election.

Wike is not alone. The Rivers State helmsman has four other Governors solidly behind him and are backing every move and calls he makes and are willing to accept any decision from the Ikwerre-born politician.

Wike had made good his promise of supporting Peter Obi with logistics by providing vehicles and venue for his presidential rally in Port Harcourt recently.

He went on to vow that he would by January tell Rivers people and his supporters nationwide the candidate to vote for in the presidential election, vowing to move from State to State to campaign for that very candidate.

Right now, as DAILY POST reported, Wike and his aggrieved G-5 governors are in London, United Kingdom, where they are expected to brainstorm and come up with a final stand on the candidate to support for the country’s top political position.

There is the general belief that they are likely to choose between Obi and Bola Ahmed Tinubu of the All Progressives Congress, APC.

While Nigerians await the decision of their meeting on the choice of a presidential candidate, an insider told DAILY POST what might be the end point of the meeting.

Note that the group has refused to campaign for Atiku, insisting that the North cannot produce the Presidential flagbearer and the National Chairman of the party

Other members of the G-5 are governors of Benue, Oyo, Enugu and Abia States, who alongside Wike demanded the resignation of Iyorchia Ayu as the PDP National Chairman.

A source, who spoke to DAILY POST had this to say: “Before I answer your main question let me first tell you this, any candidate that these governors have chosen might just be the next President of Nigeria. I will tell you why.”

“The reason is simple. Wike behaves like a mad man whenever he is chasing something and wants to prove a point. He is going to take that candidate’s campaign for the remaining weeks personal,” the insider, who is an aide to one of the aggrieved governors, told DAILY POST.

He added that, “Their decision will change so many things and create fears in the minds of the other candidates and their supporters. The time of grace for the PDP presidential candidate has passed. Now is the time for the big decision that will turn the political narrative around.

“The reason for this meeting is for all members of the group to agree on one thing. They really don’t want to speak in diverse tones. They want to embark on a massive campaign that will shake Nigeria in January so they want to agree on one candidate to avoid division. They can’t make such a mistake.

“From what I’m seeing, they may push for Peter Obi. For Wike, it has been Peter Obi and I think Governor Ortom has also bought into that idea.

“They’ve seen that Obi, not Labour Party, has massive support majorly from the youth population and they are convinced that with their support, Obi might just win. But they all need to be in concordance and thoroughly examine their next move.”

But the last minute meeting between Tinubu and the governors may alter the permutations and end up in the favour of the ex-Lagos governor.

Also speaking on the matter, a member of the PDP Campaign Council, who does not want to be mentioned, said the G5 can even travel to the moons to take whatever decision they want to take, insisting their decision won’t change anything.

“Well, whatever they announce now is not new to Nigerians. Nigerians already know their decisions. You will be surprised only if you have not been following the political development since after the presidential primary. They can go anywhere.

“They can travel to the moon to make their worthless decisions. Nigerians have decided that Atiku is their next President and you think Wike, Ortom and others can change that? They may be governors but are they bigger than the electorate? Let them hold their meetings after which Nigerians will decide.

“It doesn’t bother His Excellency or his campaign which has been in full gear. You can see the massive support from Nigerians in every State we visit. The people are fed up with the current APC hardship and they know that only Atiku can save the situation and unify the country,” he further stated.