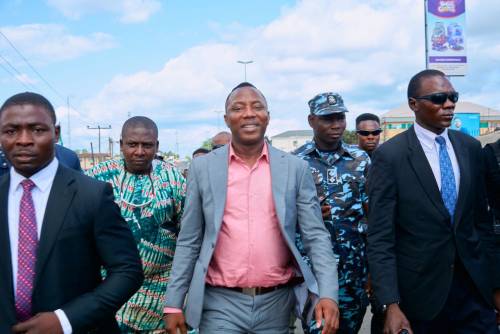 Sahara Reporters Publisher and presidential aspirant of the African Action Congress, Omoyele Sowore has asked Nigerians to reject both the ruling All Progressives Congress and the opposition Peoples Democratic Party in the 2023 general election, Njenje Media News reports.
Sowore said that the country now needed someone with fresh ideas and competence to take over the seat of power from President Muhammadu Buhari.

Speaking with journalists at Akure Airport shortly after arriving in Ondo State with cheers from multitudes of supporters, the rights activist reiterated that those currently ruling the county had failed to perform well despite their initial promises.

He added that Nigerians had suffered under the leadership of PDP and APC which have held the country back in the last 16 years.

According to him, Nigerians most especially the youth needed to challenge those seeking political power in the country ahead of next year’s general election.
He said, “This is the right time to challenge those in power and bring those with fresh blood, ideas, and initiatives that can change the narratives for Nigeria.

“Both APC and PDP are yet to have a candidate and they would never have a candidate that would be acceptable to Nigerians. The end of both parties has come.
“The time to do for the people has arrived. The time for the nation to work for the Nigerian people has also arrived.
“Other political parties are even going into extinction and we would help to consign them into the dustbin of history as soon as possible.
“For the people of Ondo State, and those who have not heard, I, Omoyele Sowore is going to be the next President of Nigeria.”
Speaking on his return back to his country home, the AAC presidential candidate said he was happy to be received by the crowd of supporters and people of Kiribo community in Ese Odo area of Ondo.

Sowore also described his incarceration in prison by the Nigerian Government after his unjust arrest by the Department of State Services as a complete waste of time.
He added that he was stronger and bolder now that he has been released to move around the country, stressing that he would continue to speak against injustice in the land.
He said, “It is a waste of time because nobody can fight history. No law court can find a justifiable reason to jail anybody that is fighting justice and this country needs justice.
“I have only one step to take to fight for what is just and right. Three years later, I have been proven right. Those who took me to Abuja, detained me thereby putting me in the DSS facility and Abuja city, they have now been disgraced and would soon be out of power and we are coming into the office very soon.
“The Sowore that they thought could be cowed in 2019 has now become stronger, bigger and more powerful. The young people that we have been fighting for have also become bolder.”