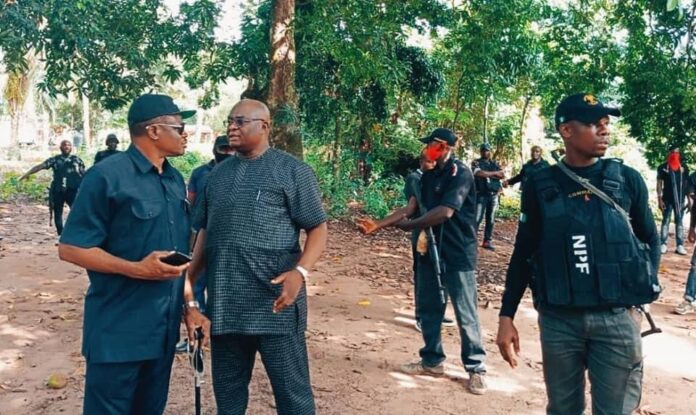 Anambra State Government has destroyed a building known to house and serve as hideout for notorious kidnappers.

Though the hideout was raided recently, exhibits recovered at the crime scene include locally made pistol, shrine, charms, concoctions, indian hemp, among other incrementing materials, while some arrests also made.

The gunmen had entered Oko through Nanka for a kidnap operation and almost succeeded but for the prompt intervention of the police special force acting on a tip- off which engaged them in gunfire.

One of them was killed, but others escaped with various degree of injuries.

The gunman killed at Oko was identified as a former vigilante who was part of a four man gang who have been involved in high profile killings and kidnapping around the area.

However, the state police command while reacting through the spokesperson, DSP Toochukwu Ikenga confirmed the report, but was unable to account for the killing of the vigilante member who later joined the criminal gang.

DSP Ikenga explained that the command received distress call about the kidnap of two persons at Oko, and while on their trail, they learnt that the gang had kidnapped two more persons at Ekwulobia, and quickly pursued them and were able to track them down.

He said that Police operatives working with the vigilante stormed the location, on Sunday, rescued the four victims and arrested one Emeka who was suspected of complicity.

When interrogated, he confessed to the crime and led detectives to the hideout of his gang in Oba, Idemili South, where a shootout ensued.

According to Mr. Ikenga, the gang leader, one Chinedu Ajogu, AKA Sampolo was gunned down and five other persons including their native doctor was arrested for interrogation.

Later at the Government House, Awka, Governor Chukwuma Soludo who commented on the demolition exercise and the security situation in the state, said the move would serve as a deterrent to other criminals.

The Governor explained that it has been established that they used the building as a den for criminal activities, stressing that the government policy does not allow any criminality to reign in the state.

He warned that henceforth, in line with the law, criminals will have no place in any part of Anambra state, according to the Government’s determination to ensure that the state is safe for everyone.

The Governor who drummed the efforts of the state government in its bid to keep the state safe for the people, applauded the cooperation by some people in the state in terms of volunteering information, adding that every stranger is suspicious until his or her job is confirmed to be legitimate.

According to the Governor who emphasized that any building being used for such purpose will be brought down and confiscated by government, seeing this shows that people’s lives are in danger if they don’t report strangers and criminals operating in communities, cautioning against any form of conspiracy of silence.