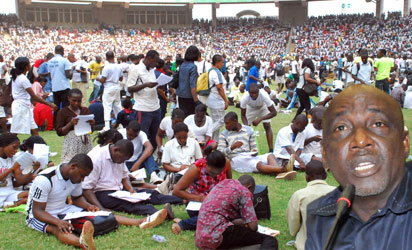 The EFCC, had on 11th May, 2016, arraigned Mr Moro, alongside with a former Permanent Secretary in the ministry, Anastasia Daniel-Nwobia; an ex-director in the ministry, Felix Alayebami and a firm, Drexel Tech Nigeria Ltd.

They were arraigned on an 11-count charge of conspiracy, fraud and money laundering in the 2014 Nigerian Immigration Service (NIS) recruitment exercise.

The defendants pleaded not guilty to all the charges.

Justice Dimgba while delivering ruling in a no-case submissions by the defendants, discharged and acquitted Dretex Tech Nigeria limited from the entire charge.

The judge also discharged Senator Moro of the criminal charges brought against him by the EFCC.

He held that the anti-corruption agency failed to establish ingredients of fraud that could link the lawmaker with the alleged offence.

Justice Dimgba, while discharging Senator Moro who was a minister under President Goodluck Jonathan government from the alleged fraud aspect of the recruitment exercise, however ordered him to defend himself on the public procurement aspect of the charges.

Delivering judgment the court held that it was evident the former Minister took all necessary measure to ensure proper crowd control, through the deployment of security agencies to the venue of the exercise.

However, the court found the former permanent secretary guilty of count 4 of the charge.

”Having found that she was responsible for total compliance to the Bureau of the Public procurement act and detecting that there was a in breach in the act before the was firm contracted to carry out the recruitment exercise and did not raise any issues made her culpable.

The court adjourned till 27th April for sentencing of the 2nd defendant.