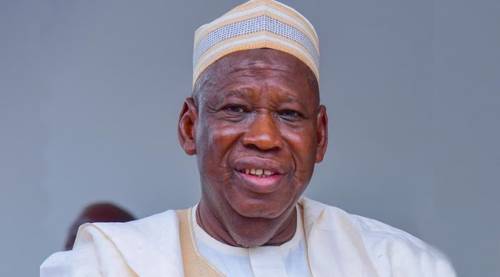 The call was made by Barrister M Bakaro, the head of the legal team representing Kajara, , enmeshed in a case of alleged blasphemy, in a press conference on Sunday evening in Kano.

He also alleged that Ganduje had compared the cleric to Boko Haram militants and a controversial preacher in the past, Maitatsine.

Bakaro, as well as other members of the legal team, noted that the statements of the state government are prejudicial and a threat to the course of justice for Kajara.

According to him, there are pending cases before the State and Federal High Courts as well as the Upper Sharia Court that should restrict the governor as the state’s Chief Executive from making utterances viewed as prejudicial and a threat to the course of justice as it relates to their client.

He also described the process of the arrest of the scholar as a violation of the proper legal procedure.

According to him, the governor wrongly ordered the cleric’s arrest, took him to court by 7:30 pm on the same day and later detained him in a Correctional Centre in Kano.

He said the action contravenes the law.

“On Monday, 19th July 2021, the Governor of Kano state in the midst of some religious personalities made statements implying the following: He linked our client (Sheikh Abduljabbar Nasiru Kabara) with the dreaded Maitatsine and the Boko Haram.

“He admitted making the order for the detention of our client at the Nigerian Correctional Centre, Kano. The order which ought to have been made by the court before which our client is standing trial in case No. CR/1/2021. Likewise, the governor made a statement giving direction to the cause of the trial that is yet to commence before the Upper Sharia Court.

“He concluded that our client has abused the personality of the Holy Prophet of Islam (S) notwithstanding that it is a subject matter of a case pending before a court of law for determination which our client pleaded not guilty to.

“He denied our client his right to freedom of religion, thought and expression by accusing him of deviating from the view of Saudi Arabia Salafy scholars (which to the Governor shall be adhered to since it came from Saudi Arabia) despite the pendency of the case with suit No. FHC/KN/CS/145/2021 at the Federal High Court in which our client seeks to enforce his fundamental rights of religion, thought and expression as enshrined in the Constitution of Nigeria,” Bakaro stated.

The team of lawyers called on the Kano state governor to desist from further interfering in the course of judicial process as all the issues are now before various courts of law.

They also urged all stakeholders including the International Bar Association, Nigerian Bar Association, civil society organisations and security agencies in Nigeria to closely monitor the activities of Ganduje in relation to the cases and ensure that justice is not only done, but seen to have been done to their client.