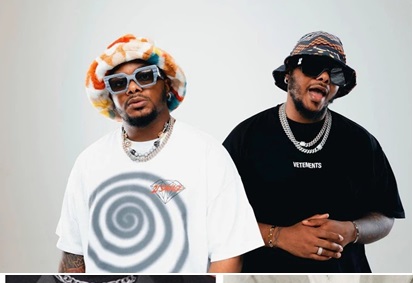 Well respected South African music disc jockeys, Major League DJz have been consistently linking up with international stars. The SA duo recently hinted at their musical collaboration with Skepta; they also shared a photo of themselves with the British rapper.

The twins have finally decided that this year, they will join forces with Floyd Joy Mayweather Jr. the American boxing promoter and former professional boxer. He currently owns a team in the NASCAR Cup Series named The Money Team Racing

Major League DJz are a popular South African Disc Jockey and production duo made up of twin brothers, Banele and BandileMbere. They were born and raised in Boston, in the United States of America. They moved back to South Africa after the Apartheid era. They hail from a musical background as their father was into music.

The award winning South African music art & rapper Skepta, have also decided to join in on what is supposed to be the most viral collaboration in the world of entertainment as have been spotted with Major League DJz&Mayweather.

First learning how to play the piano, the duo DJz began chasing a music career, disc jockeying and producing songs after graduating high school. They later began hosting after parties for various celebrities including 50 Cent, Fat Joe, and Akon.

They are presently considered the leaders of the “New Age Kwaito” music which they have pushed so well. They have also released various hit songs which have celebrated various music styles of music including Hip-hop, Rap, Kwaito, Jazz, Amapiano and Afro House. They are currently one of the biggest DJs in all of South Africa and in Africa.

RELATED POSTS:  Encomiums pour in for Olu Jacobs at 80

The Major League DJs are considered the leaders of the “New Age Kwaito” music. They have featured, and been featured by several local and international artists on various hit songs including Frank Casino’s “Sudden”, and Gemini Major’s “RaggaRagga”.

The Award winning South African amapiano music disc jockeys, began their career in music at a young age. Their father was a pianist, meaning they have always had music in their blood. The duo first off learnt to play the piano, after which they decided to pursue a career in the music industry. Their mother, knowing how cruel the music industry can be tried to encourage them to do something less musical but they chased after their dreams instead.

After high school, they began Deejaying and producing songs which they became great at. They later on began hosting parties for various international artists including 50 Cent, Fat joe and Akon. They started off releasing Kwaito and Jazz music which quickly caught on in South Africa. They also ended up playing at various popular clubs in the country and performing at some of the biggest events.

In 2016, the duo signed to Mabala Noise which led to collaborations with some of the biggest names in the SA music industry. The label was first introduced to them by their friend, SA Hip-hop star, Riky Rick. After their signing, the label initiated their collaboration with Anatii and CassperNyovest which turned out to be a huge success.

The post Major League DJz to collaborate with Mayweather&Skepta appeared first on The Sun Nigeria.