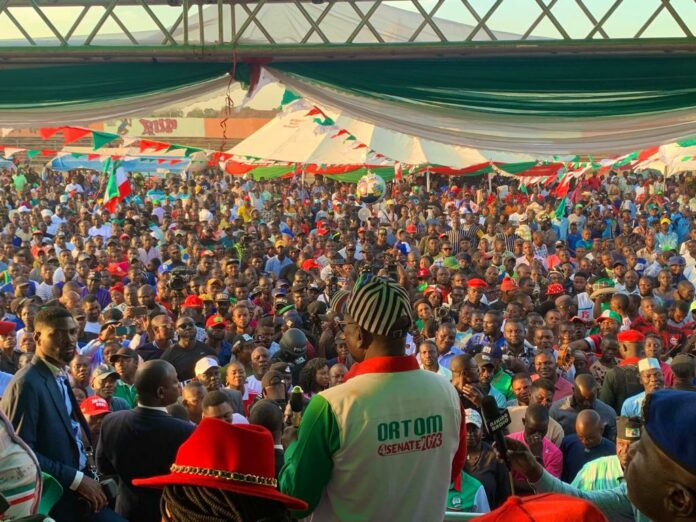 Benue State Governor, Samuel Ortom who is the PDP Senatorial candidate for the Senatorial seat while addressing the teeming party faithful at the campaign rally said the party remains committed to winning all its elections in the state.

He particularly appreciated the support of the people and charged them to continue to support the party.

In his words: “I appreciate you for your commitment to the cause of Benue State. You have been good to me, you have never disappointed me and this time around, you have demonstrated that. Your outing today has really overwhelmed me and I am grateful.

“I want to assure you that we remain committed. Benue State is PDP, and PDP is Benue State. By the grace of God, we are going to win our elections,” he stated.

The Governor urged the people to vote for Titus Uba as his successor, emphasizing that “by the grace of God, I want to assure you that Titus Uba will take over from me as the Governor of Benue State come 2023. Don’t be carried away by rumours and what people say.”

The Senator representing Benue North-East Senatorial district, Dr Gabriel Suswam in his remarks stated that Ortom had the leadership courage and political will to effectively represent and protect the interest of the state if elected to the Senate and charged the people to vote him overwhelmingly.

Senator Suswam particularly noted that Benue State was marginalized in the national political equation and men of uncommon courage like Ortom were needed in the Senate to collaborate with his colleagues to make a case for the state.

He charged young people to stand firm to protect the future of the state, urging party stalwarts to return to their polling units and mobilize support for the party.

On his part, Senator representing Benue North-West Senatorial district, Barrister Orker Jev said he was prepared to hand over the Zone B senate seat to Ortom whom he noted was poised to represent and protect the interest of his people, stating that there were many good reasons why Ortom deserved to be elected to the Senate.

Also speaking, Senator representing Benue South, Comrade Abba Moro said the PDP was on rescue mission following the misrule of the APC-led government, emphasising that the party in the state will key into the leadership of Governor Ortom to ensure all candidates win in next year’s polls.

Governorship candidate of PDP in Benue State, Titus Uba who spoke through the Deputy Governorship candidate, Sir John Ngbede, pledged to sustain the security initiatives as well as achievements in infrastructure, education and health put in place by the Ortom administration.

Wife of the Governor, Dr Eunice Ortom in her brief remarks, expressed appreciation to Benue people for the support given to the administration of Governor Ortom and their commitment to elect him to the Senate.

Earlier, Chairman of the occasion, Senator Fred Orti and Chairlady of the occasion, Mrs Justina Sorkaa in separate remarks lauded the performance of Governor Ortom, particularly for running an inclusive government and urged the people to vote for him.

In separate remarks, the Director of the Benue North-West Senatorial campaign, Hon Mike Mku said the PDP was poised to winning the polls, urging the people to vote Ortom for Senate as he had the qualities for the task, while the guest speaker, Dr Cletus Tyokyaa said Ortom was favoured by zoning and track record of performance.

The Acting State Chairman of the Party, Hon Isaac Mffo presented PDP flags to all candidates of the party in Benue North-West Senatorial district.