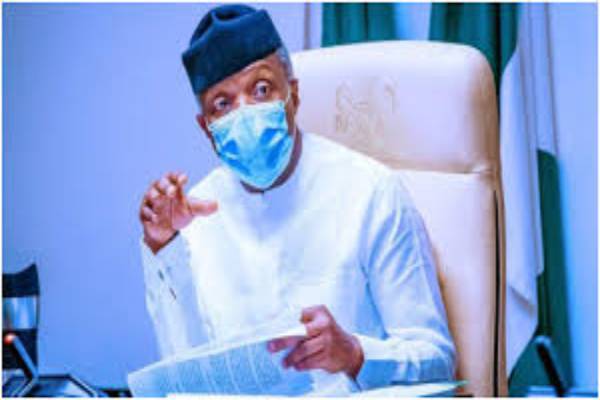 Prof. Osinbajo stated this today in a message delivered at the closing of the 2021 Conference of African Insurance Practitioners, themed “Rebuilding Africa’s Economy: An Insurance Perspective.”

While urging African insurance practitioners to leverage opportunities in the AfCFTA, the Vice President said “every smart economic grouping, whether governments or businesses, must be thinking, planning and strategizing for these new times.”

According to the VP, “the free trade agreement presents a major opportunity for African countries. By some estimates, if we get it right, we can bring several millions out of extreme poverty and raise the incomes of 68 million others who live on less than $5.50 per day. There are potential income gains of up to $450 billion, and just cutting red tape and simplifying customs procedures alone could drive up to $250billion of that sum.

On the issue of climate change, Prof. Osinbajo probed, “how is the African insurance industry preparing for the interesting days ahead?”

Referencing a Mackenzie podcast transcript, the VP said, “it was quite eye opening. While there will obviously be opportunities for new insurance products and solutions, especially in the property and casualty segment of the business, insurance companies must also be prepared for the systemic nature of climate induced damage, with the possibilities of market failures and more system-wide destabilization.

Prof. Osinbajo then added that, “for Africa, there is perhaps a more significant challenge. In the past two years, the wealthier countries, after building their own economies on fossil fuels, are now banning or restricting public investments in fossil fuels, including gas. Seven European countries, including France, Germany, and the United Kingdom, announced that they would halt public funding for certain fossil fuel projects abroad.

“Also, the World Bank and other multilateral development banks are being urged by some shareholders to do the same. The African Development Bank, for instance, is increasingly unable to support large natural gas projects. Already, some OECD based insurance companies are already committing to reducing their commitments to carbon intensive industries by 2030.”

“You must be at the forefront of the campaign for a just and equitable transition to a low carbon future. This means that we cannot accept a defunding of gas projects when gas is an important transition fuel for us. Not just to get our people from the environmentally damaging firewood to cooking gas, and also autogas for our auto vehicles, but to also provide much needed power for industries and domestic use.

“Africa’s economic future might really be at risk if we do not find our voices and, in unison, insist that the necessary speed to zero emissions must not mean disaster for our African economies,” the VP added.