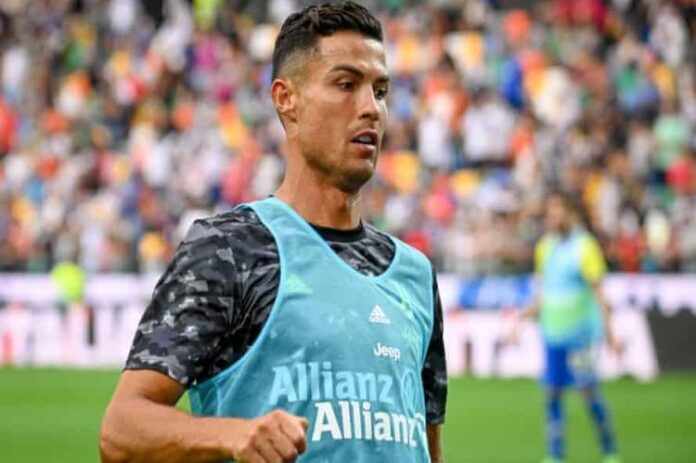 Portuguese Superstar, Cristiano Ronaldo, is set for a sensational return to Manchester United 12 years after leaving Old Trafford for Spanish Giants, Real Madrid for a then world record #80 Million transfer.

The Portuguese international was initially offered to the Premier League champions, Manchester City, after they missed out on a move for Tottenham’s Harry Kane.

But Cristiano Ronaldo will not be moving to Manchester City despite the Portuguese international being set to leave Juventus, rivals Manchester United are now in advanced talks with the player.

City sources say Ronaldo’s agent Jorge Mendes offered the former Red Devils forward to them after they missed out top target Harry Kane when he decided to stay at Tottenham.

However, City have decided against pursuing a move for the 36-year-old, with Old Trafford now considered a possible destination.

In a press conference on Friday, Pep Guardiola suggested City’s squad will remain the same despite failing to replace Sergio Aguero who left for Barcelona at the end of last season.

“The position right now this is my feeling that I am more delighted with the squad I have and we will say the same,” said Guardiola.

“I am incredibly happy with the squad I have more than satisfied. We are the same squad except one player leaves Sergio and we have Jack [Grealish].”

United boss Ole Gunnar Solskjaer, however, refused to rule out a deal.

“I don’t want to speculate too much. Cristiano is a legend of this club, he is the greatest player of all time,” said Solskjaer.

“He’s such a tremendous human being so let’s see what happens with him; everyone who’s played with him will have a soft spot for him.”

Juventus boss Max Allegri confirmed at his news conference that the five-time Ballon d’Or winner has no “intention of staying” with the Italian club.

He was seen leaving Juventus’ training ground on Friday morning while the rest of the team began their session, before Allegri confirmed he wants to leave.

City held some talks earlier over the possibility of a deal but there was no agreement over terms with the player or club.

The former United player was believed to be open to a move to Etihad Stadium despite saying in the past that he would never line up for one of the Red Devils’ main rivals.

Juventus are looking for around €29 million (£24m/$34m) from any potential buyers, otherwise they would suffer a capital loss.

Bride To Be Dies 3 Hours To Wedding

I Am Still In Charge, No One Can Stampede Me Out...