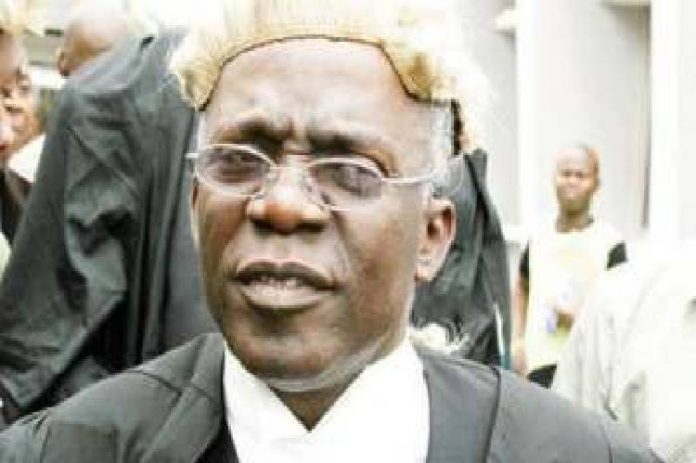 Human rights lawyer and Senior Advocate of Nigeria, Femi Falana, has said the government of President Muhammadu Buhari deceived Nigerians with his resolve to wage war against corruption at the inception of the administration, saying events in recent times have exposed the deceit of the government, Njenje Media News reports.

The lawyer, who was reacting to the last week’s state pardon extended to former governors of Plateau State, Joshua Dariye; and Taraba State, Jolly Nyame; who were jailed for stealing their various state funds, noted that the action of the government has further legitimized corruption and mismanagement of public funds in the country.

Falana, while speaking with journalists in his country home of Ilawe-Ekiti, Ekiti South West Local Government Area of Ekiti State at the weekend during the tenth coronation anniversary of Alawe of Ilawe-Ekiti, Oba Ajibade Alabi, explained that the reasons advanced by the federal government in age and health grounds in releasing the two former governors were self-serving and unacceptable.

The lawyer lamented under the present government, those accused and established to have stolen public funds running into billions of naira have been discharged and acquitted by the court through the deliberate frustration of their cases by the office of the Attorney General, Abubakar Malami, SAN, saying the most touted fight against corruption has collapsed like a pack of cards.

“There are convicts in the nation’s correctional centres who are much older than the two former governors. By the way, the government has been giving different reasons for the pardon; we were told they are being released on compassionate grounds, on heath grounds and on age grounds but what is important is that the Buhari administration has abandoned the anti-corruption crusade.

“The pardon extended to the two former governors is an infinitesimal aspect of the abandonment of the anti-corruption crusade. There are those who have stolen billions of naira whose cases have been dropped or withdrawn from the courts by the Attorney General of the Federation(Abubakar Malami) who simply filed prosequi motions. There are others who were discharged and acquitted by courts on technical grounds, not that huge money was not stolen by them but the cases were compromised by the regime, while the suspects have been asked to go and enjoy their loot.”

While expressing strong reservations about the recent call by a renowned lawyer, Afe Babalola for the setting up of a six-month interim government, Falana revealed that the federal government must address what has led to the call by the elder statesman, which he said is the disturbing wave of insecurity and dwindling economy challenges bedevilling the nation.

“While you may disagree with call for an interim government, you must at the same time address what has led to the call, which is the state of insecurity in the country. Apart from issuing press statements, the government does not bother about insecurity in the country, they issue statements from time to time and President Buhari will assure Nigerians of the safety and security of their lives and property but after that, we are waiting for the next attack,” he said.

The senior lawyer who expressed fears over the conduct of the next year’s elections over the growing tension in the land occasioned by the activities of terrorists and other criminal elements said that if not nipped in the bud, it may plunge the country into a serious constitutional crisis.

Falana further said, “Since many parts of the country have been taken over by terrorists it is difficult to talk of having credible elections next year. There are some states and several local governments that have been completely overrun by terrorists.

“There is no way you can hold elections in such states and local governments. We are working towards a crisis which is going to lead to inconclusive elections if registered voters cannot exercise their franchise due to insecurity and negligence of the government. Whoever is declared winner will have problems because those who lose elections will insist that you must go and conduct elections in the areas where they are popular but which must have been taken over by the terrorists.”

He condemned the fixing of prices of nomination forms by political parties in the country, describing it as illegal, adding that outrageous nomination fees are not part of the criteria stipulated by the constitution for those seeking elective positions.