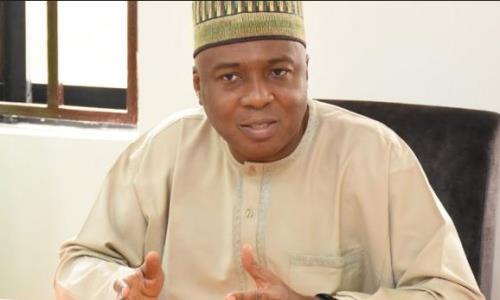 Former Senate President, Bukola Saraki has charged leaders and stakeholders of the opposition Peoples Democratic Party (PDP) in the North-Central Zone, comprising Plateau, Niger, Nasarawa, Kwara, Kogi, Benue States and the FCT to unite and work together as, according to him, the success of the party in the next national elections depends on its ability to win across the North Central Zone.

The former Kwara Governor while addressing delegates during the zonal congress of the party in Aper Aku Stadium, Makurdi on Saturday, noted in all the past elections PDP won at the national level, the party has always recorded sound victory in the North central zone and that the calculations has not changed.

“We have looked at the statistics for past elections since 1999 and projected into the 2023 elections, for PDP to return to control of federal power, the party needs to return to winning ways in this zone.

“This is a party that started with controlling four of the states plus FCT in 1999 and at one time was in control of all the six states. Today, a situation where we now have only one state is partially responsible for our loss of federal power.

“Therefore our leaders in the zone must make sacrifices, forget their differences and work together in national interest.

“With what is happening across the country today, it is also clear that the hope of rescuing, rebuilding and repositioning Nigeria to become greater depends on the PDP.

“That is why it is in the interest of Nigeria for the PDP to become stronger and united and the North Central has a key role to play in all these.

“Our zone has always been a key factor in keeping Nigeria together and moving the country forward,” Saraki stated to the admiration of delegates and leaders of the party.

Saraki congratulated the leaders and delegates for the peaceful manner in which the congress went and the unity displayed in ensuring all the zonal officers were elected unopposed after intense deliberation and give- and- take arrangement.