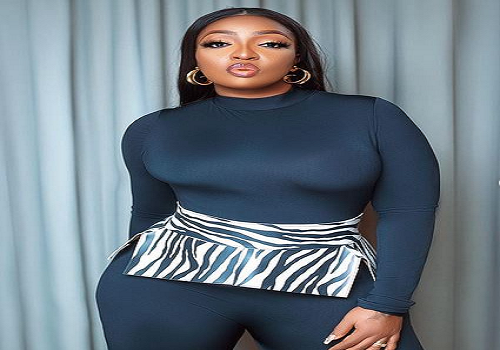 Actress Anita Joseph has advised young women to embrace and be confident in their God-given bodies.

The movie star decried the rate at which ladies go under the knife to ‘enhance’ their bodies especially their butt.

She urged them to rather build their self-esteem and quit seeking validation from people who really don’t care about their well-being.

Anita reacted on Instagram following the death of a Port-Harcourt big girl, Crystabel, who was said to have died following complications from a botched plastic surgery.

Mother hen, as she fondly called, highlighted the cons of plastic surgery, noting a body that has undergone such procedure will always need some touch up every now and then.

She reasoned that acquisition of a big butt doesn’t exclude one from being ditched by a man.

She wrote: “Once you touch your body, na so you go dey touch am dey go cos you must add weight. You will cut and always join. You must go for repairs because, it’s not natural. E be like where dem dey service motor, shalom.

“That’s why you see them top up the bum like engine oil because e dey less na. Sorry, I’m not laughing but some people own be like fufu basin…like basket.

“Be comfortable in your own skin. Build your positive self-esteem. Stop seeking validation from people that don’t really give a f*****k about you. I hope you know they also go for repairs? Oh yessssss!

Anita Joseph added: “Be confident, build your positive self-esteem. Do not allow any anu mpama body shame you. Don’t give them that power.

“Just so you know, big bumbum cannot keep a man kpichicom. Be you, just the way you are. Afterall, ladies with small bum are still winning the last time I checked. Shalom!”

Captioning her post, the actress wrote: “Crystal sudden demise hurts me. These Doctors were Dey not qualified? Oh Lord I don’t even know what I’m saying anymore. Pls slide and like I said it’s a 50/50 chance if you go come back praise God but you will still go again. That’s why I said don’t do it if you can.”

The news of Crystabel’s death was announced by a tweep, Miss Posha, who identified as the deceased friend.

Miss Posha via her Twitter handle raised an alarm that her friend, Crystabel, allegedly died few days ago at a clinic in Lagos where she had gone to do a plastic surgery.

Miss Posha claimed the clinic didn’t contact her family, until friends traced the deceased to the clinic and were told to pick her body from the mortuary.

She called on the government to checkmate the sharp practices in the healthcare sector as especially as it concerns body enhancement procedures, the crop of surgeons and ensure they are well-trained to carry out such procedures.

“I want to bring this to the public. A friend just died at this hospital in Lagos Nigeria, few days ago where she underwent surgery. Now I’m not against anybody that wants to enhance their body or anything as such, is your body life and choice, So do want you love.

“But I’m against doctors that claim they have experience abroad, come down to Nigeria to kill young people, after the surgery she complained of bleeding and the doctors claimed is normal it will stop, now this is the problem, how are you a highly skilled and professional plastic

“Hospital did not find it needful to contact any of her relatives. Until the few friends who knew she was going for surgery said she supposed to have be back since days now, now they decided to go to the hospital to check on her; arriving there, they were offered a letter that her body

“Has been deposited at the mortuary this is sickening, now I think the government need to come into this health System and check the capability of most surgeons and make their own research if really they are well trained surgeons to be able to operates on humans if not their,”Miss Posha tweeted.