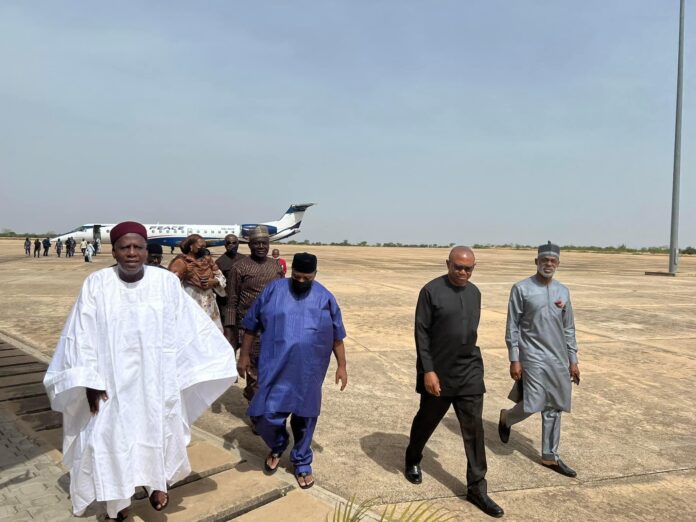 The former governor of Anambra State, and the leading aspirant for the 2023 presidential election under the banner of PDP has just arrived Bauchi state, in a bid to speak with delegates.

In a post made by Valentine Obieyem, an aide to Mr Peter Obi, he wrote; “what a lucky State, in the fullest of time, we shall continue to remember the State as Mr. Peter Obi’s first port of call during the Northern consultations”.

“As the Special Assistant to the then Director General of the Voice of Nigeria (VON) , having been seconded to his office from the Legal Department of the organisation, I had the privilege of visiting all the states of the North with the DG mostly by road. We would always visit a former DG of VON who resides in Bauchi town”.

“Travelling by air to Bauchi offered us a little exposition of the vastness of the country. As we were about to land, we saw kilometers of uninhabited semi-desert, that looks sufficiently “Sahelian.”. In my find, with a good leader, such places would, by modern technology, be heavily irrigated for food sufficiency/export”.

“Beyond the Yankari, Bauchi is a land of possibilities, weighed down, like other Nigerian states, by bad leadership”.

“Indeed, Nigerian needs the magical touch of Mr. Peter Obi. There is no doubt that the PDP needs his type to win the Presidency. Throughly tired of incompetency, whereby the Presidency has been alternating between mediocrities and below average, his ticket manifestly above average, would elicit spontaneous and revolutionary support across the country”.

Stay tuned as the details of the consultations would be transmitted live on NjenjeMediaTV. Keep the day with us!