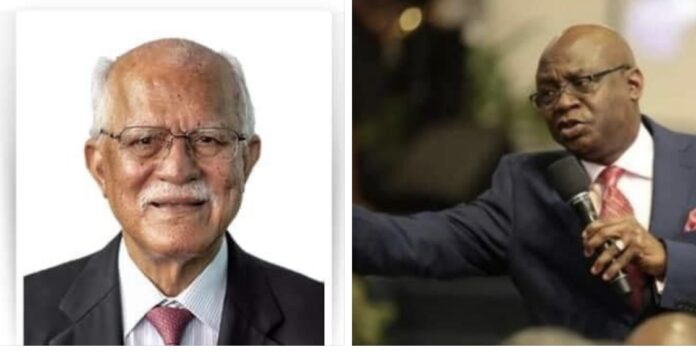 Kilo ṣe wá – why are we so different?

After giving Nigerians the gift of fast noodle known as Indomie today, the Aswani family, the family behind Tolaram group ( makers of Indomie)are betting on Nigeria’s future and it’s economy by building what is known as Lekki Deep Sea Port.

Mohan Vaswani, the father of the current Chairman of Tolaram group who started selling textiles in 1948 from a shop the size of a shipping container in a small town in Indonesia, once told his son “One day you will operate across the world.”

His son, Vaswani who is now 80 years old now oversees Tolaram Group, a Singapore-headquartered company with an estimated annual revenue of US$1.8 billion is living the prophecy foretold by the patriarch of the family.

Tolaram is building a port in Nigeria which I would discuss below, producing paper in Estonia, running a bank in Indonesia and supplying power in India. It has food production and distribution operations across Africa and sells to more than 75 countries. Now, the company is expanding into digital services and plans to add a hedge fund to its wealth operations.

The international expansion were possible because the family hit a goldmine in Nigeria by introducing and selling Indomie.

The Aswani’s arrived Nigeria in the 60’s in search of greener pastures.

Indomie was at first a flop because Nigerians at that time were not used to the fast food culture and they did not understand what it was.

My 65 year-old dad does not eat Indomie till today even though Indomie was introduced when he was my age but he was not convinced why he should discard the traditional foods available at that time for what his generation saw as a strange food.

My parent’s generation thought Aswani’s were trying to get them to eat worms.

This was the mindset prevalent at that time but the Aswani’s did not give up.

Growth came slowly — it took 13 years for revenues to reach $10m in Nigeria — before sales began doubling annually by the mid-2000s because of the reforms introduced by Obasanjo government.

The Aswani’s were resilient and preserved all through it all and today, they have hit a gold mine by just selling Indomie.

The Aswani’s has turned Indomie noodles into one of Nigeria’s national dishes and Tolaram into the largest food company in Africa’s biggest market, surpassing the likes of Unilever and Nestlé as Indomie now in every corner market stall across Nigeria, and in most kitchen cupboards — a cheap, stomach-filling staple that is so ubiquitous it features in rap lyrics.

Aside from the Aswani’s resilience and perseverance, it took consistent advertising that targets mothers, kids and the young and also hacking distribution by making Indomie available at every corner of the country for the Aswani’s to hit goldmine with Indomie.

The Aswani have businesses in 20 countries with over 16,000 employees all over the world.

At the moment, the Aswani’s are making $1 billion(572 billion naira) every year from just selling Indomie in Nigeria.

They also make over $ 500 million from selling Indomie in other African markets and foreign markets like the US and UK where Indomie is exported to for the consumption of Africans In diaspora .

Seeing they have achieved commercial success with Indomie in Nigeria which they achieved after displacing the likes of Nestle, Cadbury and Unilever in the market by taking the battle to the door steps of these established multinational companies.

The Aswani’s has another dream.

They are taking a bet on Nigeria’s long term economic future by building a deep sea Lekki port in Lagos.

It was easy for them to take the decision.

Apapa port is congested and a nightmare at the moment. The whole thing is made worse that Nigeria government is broke and cannot build another port.

Just like Daniel came to justice, the family took the decision to save Nigeria from economic woes and stagnation.

The planning for Lekki deep sea port started 10 years ago and approval for it were given by Jonathan’s government before they left but construction for the project just started last year.

The Lekki deep sea project located at Ibeju Lekki axis at the moment is 79% completed and is expected to start operations this year when completed.

The new port is being financed with $630m from the China Development Bank, and $470m in equity from the state-owned China Harbour Engineering Company, which has a 52.5 per cent stake and will build it.

Tolaram ( Aswani family who are the drivers and the initiators of the project) owns 22.5 per cent, the Nigerian Ports Authority has 5 per cent and Lagos state 20 per cent.

At the moment, Ships currently have to wait between 25 and 30 days just to get a berth at ports such as Tin Can and Apapa. Those delays will be slashed and a thing of the past when Lekki deep sea port is finished.

The project when completed will be four times bigger than Apapa port. It will also help to decongest Apapa and take vessels away from Cotonou’s port.

Going forward, the new Lekki port will also create over 200,000 jobs both formal and informal for young people in Lagos, expand Nigeria’s GDP and will be the game changer for Nigeria’s economy.

The 35 year lease on the Lekki deep sea port is to enable the Aswani’s and their Chinese partners to recover and recoup the money spent on building the Lekki port, make profit too before handing it over to Nigeria government.

This makes me wonder why Nigerian businessmen sat back and watched a Pakistani( the Aswani’s) and Chinese company buy up 35 years concession to build and manage what will be a very Lucrative Lekki port.

But beyond this, the Aswani’s are showing us, how it is done, one Lekki sea port at a time.

At a time when Nigerian pastors are borrowing 4.5 billion naira from consortium of banks to build mega churches and cathedrals where unemployed young Nigerians will go to pray for jobs, the Aswani’s are reminding us again that religion has made us poorer and for us to grow as a people and country, we need large businesses that can create jobs for our unemployed young people and also we need bold businessmen and women who are ready to take a bet and risk on the future of Africa’s most populous economy.

This is exactly what the Aswani’s have been doing since they arrived Nigeria from their native Pakistan and still doing.

I think they deserve all the applause and our eternal gratitude.