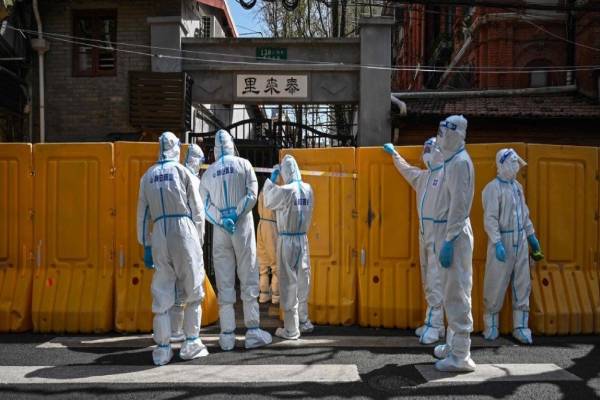 Shanghai, China’s commercial capital, warned on Wednesday that anyone who breaks the Covid-19 lockdown restrictions will face severe consequences, while also mobilizing residents to protect their city as the number of new cases surpassed 25,000.

“Those who violate the provisions of this notice will be dealt with in strict accordance with the law by public security organs If it constitutes a crime, they will be investigated according to law,” the department said in a statement.

Shanghai has had the greatest COVID-19 outbreak in China, Since the pandemic began in Wuhan.

Some people were able to leave their homes on Tuesday as the city’s two-week-long closure came to an end.

According to municipal officials, around 6.6 million people can go outside, while others must stay in their own areas, according to local papers.

Moreover, despite a Chinese health official’s warning that the virus was not yet under control, certain retailers and pharmacies would reopen.

Following the abrupt shutdown of most businesses on March 28, millions of people have been confined to their homes and have struggled to obtain daily necessities such as food and medicine.

During the first days of the shutdown, online grocers sold out early in the day, and customers faced delays as vendors battled to meet demand.

Those who test positive for COVID-19 are placed in temporary quarantine facilities, which some have criticized as overcrowded and unsanitary.

Some Chinese officials have been fired for not acting aggressively enough in advance of the outbreak.

The government of the country reported 24,659 new cases as of midnight Monday, including 23,387 with no symptoms. This figure included 23,346 people in Shanghai, where no deaths were reported in the most recent wave.

The United States said on Monday that all “non-emergency United States government personnel” will be removed from its Shanghai Consulate, prompting a foreign ministry official to accuse Washington of politicizing the evacuation.

Last week, the State Department issued a travel warning to Americans about China, citing “arbitrary enforcement” of laws and anti-virus measures, as well as the potential of “parents and children being separated.”