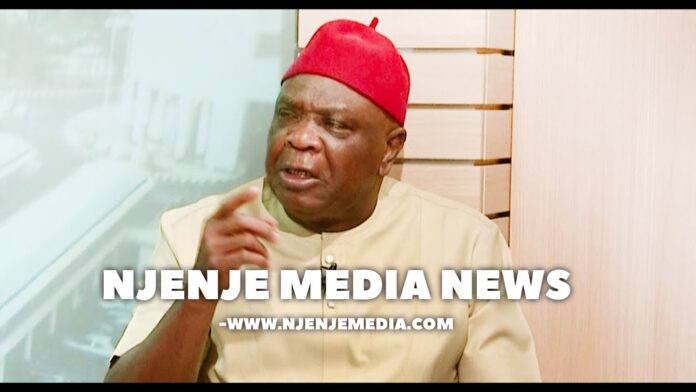 Chief V. Ulasi is a known name in Anambra State. I will not call any particular Ulasi, but “ogba oto awu ahu mara onwe ya”. As the Igbos would say, what is the Ulasi of our description known for? Is he a conservative, a liberal or a radical? Who is he and how do we give an appropriate estimate of him? Why Ulasi now? We would have spoken about him years back, but out of respect for his age. We are doing so today on the Igbo understanding that a time comes when we speak to the king even if through a veil.

A few days ago, I was called on phone by a respected Abuja-based SAN to listen to Chief Ulasi. The SAN’s reaction could be interpreted thus: “Who knows who has given him money? Who knows what he is going to say?” This is a clear image of a man whose character cannot be predicted.

I have listened to Chief Ulasi speak during his appearances in the village square and I think I understand him very well. He can argue a point today and its opposite tomorrow, depending on how his palms have been clandestinely lubricated. Indeed, Ulasi has the capacity to dress any person as a saint as well as a sinner.

One thing we cannot take away from Ulasi is his eloquence. Whenever one sees him speak in the village square, one observes him seated calmly, bubbling with vitality and wit even when he looks serious and a times quizzical. You will also observe something like languid and aristocratic air about him and in his speeches. He can rouse one to hatred of any person he discusses by his flaming eloquence and believable mien. Have you seen him appear in the village square without discussing people? Not at all! He is usually procured for demolition work on persons! While on this undignified and unedifying assignment and questions are thrown at him, he would bare his ego with unusual abandon.

RELATED POSTS:  How we discovered Usifo Ataga in pool of his blood - I.P.O.

During the governorship election in Anambra State at which Mr. Peter Obi supported Mr. Oseloka Obaze, Ulasi was at his best propitiating the masters that procured him. He usually does not have qualms using religion, politics, towns, to any purpose, including poisoning the minds of Anambra people and other Nigerians about Mr. Peter Obi. His indictment of Obi was sweeping and cruelly indiscriminate. I kept asking myself if he meant, from what he said, that Obi had no virtues at all to put in the scale against his vices. At such a time, one would be asking: “kedu mgbe osewelu?” (“When did this quarrel start?”) His criticisms always pass beyond reasonable and healthy dissent to disgraceful excesses of vituperation.

He is a clear case of abuse of God’s grace. Gifted with eloquence and courage he is using them negatively. Rather than use his eloquence to crusade for good governance, he has indeed become a purveyor of doom, often effusive, with maximum of lies and minimum of character. Each tune he finished speaking in the square, the followers of rival political parties that procured him, elevated the cacophony of his unobjective voice, as could have only come from an unspoiled barbarian, to the music of the spheres.

After all they did to kill Obi, they did not succeed, a task for which Anambra State Government, under Chief Willie Obiano, committed billions of Naira. A good man is always a good man. Nigerians who have watched Obi over the years even when they disagreed with him, know that he remains one of the best politicians in Nigerian whenever politics is measured in the sense of being service to the people and to humanity.

Today, Nigerians, including you and I, are tired about the slip of the country. We are all united in our belief that it is about time we took back Nigeria. Unlucky for Ulasi, Obi has been identified, by an inexplicable irony of history, as better placed to lead the unfolding peaceful revolution. I may not share the position of Charly Boy, but many Nigerians believe he captured it succinctly when he said that the election without Obi would have been presenting the choice of “Sniper” and “otapiapia” for Nigerians.

Prior to the primaries, Ulasi danced vigorously that we again suspected that somebody who paid him was actually calling the tunes. He dismissed Mr. Peter Obi flatly. He even went on to say that he was positioning himself to become the Vice-Presidential candidate of the Peoples Democratic Party (PDP). It was a good judgement that Obi left the PDP when it became clear to him that dollars would become a deciding factor, because it attracts the elite as honey attracts bees.

In private, we discussed how the elite is part of the problems of this country. “Val,” he said, “Nigeria is bleeding and Nigerians know that, but rather than seek ways to get it right they are angling to make money during the primaries. I pity the common masses. I know that they seriously desire to take back their country, but at the level of the primaries they are incapacitated.” Thank God everything has turned out the way it is now.

Immediately after the primaries and considering the heroic move of Obi, the love for him hit the roofs. For once, Nigerians have come face to face with a man of substance and a man with the requisite character to change the country.

As we watch him rising like some spectacular rocket capsule among the luminaries of his time, those who have vowed to remain perpetually against the rise of Nigeria are at it again. It is on this supposition that we should understand the recent appearance of Chief Ulasi in the village square.

Mindful of the capacity of Obi’s followership, he tried to soften his indictment with apparent expression of Obi’s qualification and suitability for the job. Those words of mercy were themselves so shallow that they did not soften the blow from his usually rude fist.

As a way of dismissing Obi and the aspiration, I learnt he even joined another reckless fringe in suggesting that Obi should call South-East Governors and discuss his aspiration. Would he tell us how other contestants from other region have called their own governors over the same issue? Obi’s movement is pan-Nigerian and it will be offensive for any move delineating it to a particular people – which is not the case.

As we were trying to understand him, one former governor from a neighbouring state, whom we all thought had been sobered by age and circumstance, spoke against Obi. We grant him the freedom to do so but we are shocked at the way and manner some Igbo politicians manifest themselves as repositories of political nonsense. What prompted that speech? What did the speech add to him? Could it be out of solidarity for a man who appropriated his state as much as himself before the Economic and Financial Crimes Commission (EFCC) “gbowaa ya aka, nara ya otutu ihe osutere na ohi?” (Arrested him and recovered many things he stole.)

Obi is a Nigerian phenomenon. He is known for having distinguished himself in administration and good governance. He houses the discipline and temperament our country needs today to start anew.