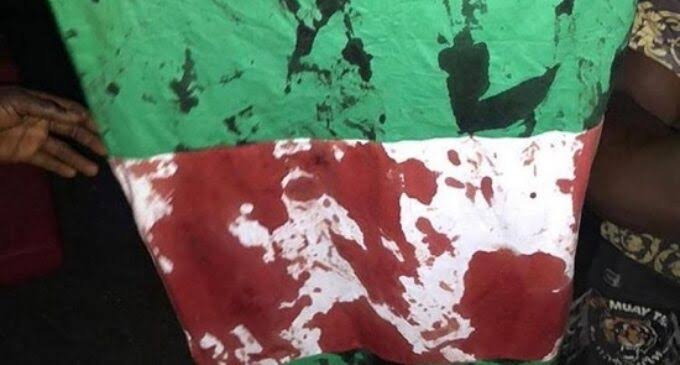 ENDSARS; Government Denials and Crackdowns, What Next? -Njenje Media TV

A Nigerian Media Organisation, Njenje Media over the weekend convened a Global Zoom Interview and Conference Session that had in attendance prominent Nigerians and Academia from the diaspora and in Nigeria like Professor Chris Imafidon, a multi-Guinness award holder, Activist Deji Adeyanju, Afenifere Scribe, Yinka Odumakin, Environmental Activist, Annkio Briggs, Media mogul, Don Pedro Obaseki and many others.

The conference moderated by Maazi Tochukwu Ezeoke and Mr Chidi Kali had the conference discussants deliberate on the #Endsars protests, the Lekki Massacre and the fallouts.

The session started with Maazi Ezeoke, the host serenading the audience on the analysis and events that preceded the protests, the alleged shooting of the protesters. The claims, counter claims, denials, accusations and counter accusations on the part of the populace, the government and the military.

The alleged shooting which was condemned by World leaders elicited reactions across the globe.

Afenifere Scribe, Yinka Odumakin in his contribution commended the youths for their sense of organization and purpose and charged them to raise a new atmosphere and should be ready to take their fate in their hands.

The Publicity Secretary of Afenifere, a Yoruba social-cultural group bemoaned the lackadaisical approach to the government officials to the sanctity of human life’s, as evident in the management of the protests and the alleged shooting of protesters at the Lekki Toll gate.

Odumakin charged the youths to be better prepared next time and should now be aware that they are dealing with a despotic, fascist and viscous regime.

Playwright, Poet, Author and former MD, Daar Communications Services, Don Pedro Obaseki in his submission said the Endsars debacle is the fallout of a institutional brigandage and until the structural deficiencies are addressed, Nigeria won’t be a nation in the real sense of it.

The media guru lampooned the CBN for freezing the bank accounts of some of the Endsars activists, adding that as the statutory regulator of banks, the CBN does not have the locus stand to freeze the bank account of an individual except the Courts says so.

According to Obaseki, Endsars is a reset button for Nigerian youths and he’s happy to hear that persons of Nigerian descent abroad are rising up to speak against the inhumane brutality of the Police and the Armed Forces.

He bared his mind on the structural imbalance in the country and added that unless the fundamentals of the badly structured Federation is addressed, which will allow people to fiscally federate, the Endsars agitation will continue and there might be anarchy.

Human rights and environmental activist, Annkio Briggs on her own part wondered why the same government that is claiming no one died in the Lekki shooting is coming around using the coroner inquest to announce on the dailies that families should come forward to identify corpses.

According to her, life is presently worthless in Nigeria and the International community are driving that fact more than Nigerians themselves.

She recalled days back that the security aides attached to the HOR speaker in a brazen display of cruelty shot dead a newspaper vendor. She said it’s making news because it’s the police details attached to the Speaker and not because of the vendor. It’s unfortunate that it’s not about the Speaker and not about the irresponsibility of the Police nor empathy for the victim.

In her words to the youths, “The youths are going to have to be firm, they also have to know that this is not a battle that the youths can take on, but this is not the time to pull back, this is the time to regroup, this is the time for the youths to pick out elders and those in the middle age and choose among these crops the people they can genuinely rely on. There need to be a synergy that needs to be developed between the youths that organized this movement and the people older than them, that may not necessarily be politicians but people they can trust and rely upon to take this to the next level. I think the next level is going to include all of us, it’s going to include the social media controllers, the people that have always been advocates and not necessarily career politicians.”

The amazon of the Niger Delta as she’s fondly called, asked for the alignment between those are based here in Nigeria and those outside the country in raising a voice against impunity.

Multi-Guinness World Record holder and Virtual keynote speaker, Professor Chris Imafidon in his remarks at the conference stated that one of the cardinal roles of the government is to protect and preserve life’s and properties but instead lives were wasted by an apparatus of the government.

He says it is baffling that ignorance can allow justice to be given leeway.

He said that Nigeria automatically fail to have the right to assemble in the committee of nations if fundamental human rights are violated.

He further opined that the Hashtag Endsars is a bigger army than the entire Nigerian Military.

“Let me say this slowly, the armed forces (Navy, Airforce, Army) cannot take on one single hashtag whose time has come”, he said.

“I want to reassure all the domestic local boys and girls that stood up that day asked for 5 basic things which are now submitted is now global. Every single parliament on earth has a copy of those 5 basic things they are asking for and they would echo it at any point in time”., he added.

According to the multi-Guinness world record holder, what the youths asked for isn’t impossible to be granted, they asked for what is tenable and cannot be taken for granted anywhere in the world.

Head of Mission, Leadership and Accountability Initiative, Transparency International, Mr Henry Shield, a guest on the virtual conference in his submission posited that the general consensus is that Nigeria has a government that is disconnected from the reality of the people they govern.

He expressed sadness that the same government that could find it to successfully send its army to troubled spots in the North East could launch them on to peaceful protesters demanding their rights and freedom from Police brutality.

He said the Endsars drama (Acceptance, denials by the government and army with the back and forth) points to the fact that the man that is meant to be in charge of the country is not truly in charge.

He recalled that it took the President 12 days to address the nation on the Endsars protest.

One of the highlights of the conference was the eyewitness account of one of those present at the Lekki Tollgate, Lagos where the shooting by the Military took place.

The lady, who preferred to be anonymous for security reasons gave her account of the event, stating that she has a friend who was shot that day and can’t be found till this moment. Shortly after her distress call, her phone went blank and no one knew till now where she is.

She also shared insight into the story of another lady reportedly killed at the protests, but a cover up was made.

In her exact words, ” There was a video of a lady dancing at the protests and was visibly present on the 20th, but she was found dead later on. We got to know they are paying some families millions to deny that their members were shot or killed. The family of this particular girl had to lie she died from an accident when clearly everyone saw how she was shot on that protest ground on Tuesday”

She further stated that a lot of families of the killed are scared to speak out, some areas being threatened, some have been paid.

The communique at the end of the meeting by the guests calls for the treatment of the 5-point demand of the youths with the government through it’s various agencies engaging the youths and updating them on progress made.

The bank accounts of some Endsars conveners who were hitherto freezed should be unfreezed.

The communique called for Proper documentation of The SARS abuses, the resulting protests and killings of protesters. A coordinated projection of these events will attract the attention of the global community as the evidences won’t be easy to ignore.

Events that preceded, happened during and after the protests should be catalogued in the public domain for use of the international community.

The communique further called for the arrest and prosecution of those directly and indirectly involved in the massacre to show that justice can still be served even in the face of gloom.

The show host, Maazi Tochukwu Ezeoke in his closing remarks thanked the guests and participants for their inputs, submissions and suggestions on The ENDSARS debacle. He further added that the protesters and the victims cut across all tribes and ethnicity, hence the shootings aren’t about tribe. He bemoaned how those who are meant to protect us ended up killing us. He lamented the cross profiling by the police and SARS on account of appearance and even Social media profiles.

The excesses of the Police and Military officials must be curbed.