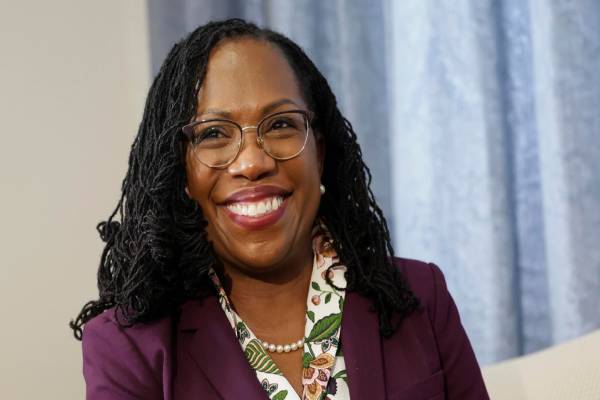 he Senate has confirmed Judge Ketanji Brown Jackson to the United States Supreme Court, marking the first time a Black woman has been appointed to the nation’s top court.

Three Republican senators have endorsed Jackson, who will succeed Justice Stephen Breyer when he retires this summer. While the vote will be far from the massive bipartisan confirmations for Breyer and other justices seen in previous decades, it will nevertheless be a big bipartisan achievement for Biden in the 50-50 Senate after GOP senators fought hard to portray Jackson as too liberal and soft on crime.

On the liberal side of a 6-3 conservative court, she would join two other women, Sonia Sotomayor and Elena Kagan. For the first time in history, four of the nine justices would be women, with Justice Amy Coney Barrett on the other end of the bench.

Following a grueling session in which Republicans on the Senate Judiciary Committee fiercely questioned Jackson on her sentencing record, three GOP senators came out and stated their support for her. Senators Susan Collins of Maine, Lisa Murkowski of Alaska, and Mitt Romney of Utah all expressed the same thing: they didn’t always agree with Jackson, but she was clearly highly qualified for the job.

Collins and Murkowski also criticised the increasingly political confirmation process, which Collins described as “broken” and “corrosive” and “more divorced from reality by the year.”

Biden, a former member of a more bipartisan Senate, made it clear from the start that he wanted bipartisan support for his historic nomination, and he invited Republicans to the White House while he made his pick. It was an attempt to turn back the clock after three bruising Supreme Court battles during President Donald Trump’s presidency, when Democrats vehemently opposed the nominees, and after Republicans blocked Supreme Court nominee Merrick Garland from receiving a vote at the end of President Barack Obama’s presidency.

With her parents and family seated behind her, she told the panel that her “path was clearer” as a Black American than theirs. Jackson attended Harvard University, worked as a public defender, at a private legal practice, and was named to the United States Sentencing Commission in addition to her nine years on the federal bench.

“I have been a judge for nearly a decade now, and I take that responsibility and my duty to be independent very seriously,” Jackson said. “I decide cases from a neutral posture. I evaluate the facts, and I interpret and apply the law to the facts of the case before me, without fear or favor, consistent with my judicial oath.”

After Barrett, who is 50, Jackson will be the court’s second youngest member once sworn in. She would be the first person in nearly 30 years to serve on a court with no one above the age of 75.

Cases concerning race, both in college admissions and voting rights, will define Jackson’s first term. She has stated that she will not participate in the court’s review of Harvard’s admissions program because she is a member of its board of overseers. However, the court may separate a second case involving a challenge to the University of North Carolina’s admissions procedure, allowing her to weigh in on the matter.

Republicans spent the hearings interrogating her sentencing record on the federal bench, including the sentences she handed down in child pornography cases, which they argued were too light. Jackson pushed back on the GOP narrative, declaring that “nothing could be further from the truth” and explaining her reasoning in detail. Democrats said she was in line with other judges in her decisions.

Many Republicans, including Senate Majority Leader Mitch McConnell, argued in a floor speech Wednesday that Jackson “never got tough once in this area” as a result of GOP questioning in the Judiciary Committee.